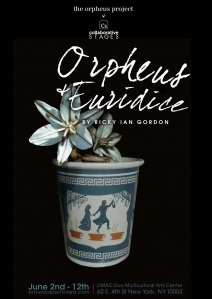 Ricky Ian Gordon's gorgeous chamber piece, Orpheus & Euridice, is being given an excellent production by The Orpheus Project and Collaborative Stages through June 12th. If luscious song cycles with a glorious sound somewhere between musical theatre and opera are your cup of tea, don't miss this!

Gordon's 55-minute Orpheus & Euridice features three performers: a clarinet player as Orpheus, a soprano as Euridice, and a pianist. In this production, husband and wife Ryan Dudenbostel and Heather Dudenbostel play the leads. While not every real couple has onstage chemistry, the Dudenbostels do, much to the benefit of the piece. Heather D. sings Euridice beautifully (though she is occasionally shrill), and her acting is simple and effective. Ryan D. dances through his role, first as a charming sprite and later as a mournful force of nature. His sheer likeability adds a great deal to his performance, and his ability to act while playing the clarinet is impressive. Pianist Jad Bernardo provides top-notch support with his wonderful, sensitive playing. The three performers have melded into a whole that is greater than the sum of its parts, and its parts are damned good to start with!

Stephen Sondheim is on record as saying that too many reviewers write about music without really knowing much about music. I have to plead guilty to this charge. I am sure there is more to be said about Orpheus & Euridice by people who have the knowledge and vocabulary. Nevertheless, I remain confident that this is an outstanding production of an outstanding piece.

(I do wish I knew whether the lack of clarity of the lyrics is Heather D.'s fault or just the inevitable result of her needing to hit those operatic notes. Either way, I recommend that you read the lyrics provided in the program before the show starts.)

The piece is smartly directed by Brian Letchworth. Zhuojie Chen's projections add an extra dimension both visually and emotionally. And compliments also to graphic designer Patrick Sullivan for his attractive and wry graphic (shown here).

(Press ticket, third row on the aisle.)
Posted by Wendy Caster at 8:25 PM

I went to college with Brian Letchworth. Wonderfully talented (he was valedictorian the year he graduated)--glad to see he's doing well for himself.

Cameron--Will you get a chance to see this?