The Eyes of Babylon 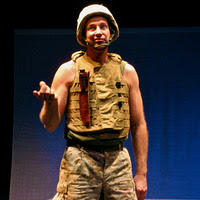 By coincidence, I saw three plays about soldiers in Iraq this weekend (in order of viewing): Ajax in Iraq (not reviewed), Goliath, and The Eyes of Babylon. The Eyes of Babylon is the only one that was written and acted by a Iraq war veteran. How odd, then, that it turned out to be anticlimactic.

Jeff Key joined the marines in his thirties, eager to defend the constitution, protect defenseless people, and promote peace on earth. Once in Iraq, he had to deal with the fact that he was doing none of those things. In addition, as a gay man he was forced to stay in the closet, which is a galling location for someone whose dream is to fight for freedom for all.

The Eyes of Babylon is structured as a series of vignettes based on Key's journal entries, some of which are considerably more compelling than others. The best is the story of flirting with an Iraqi man in a code that they invent as they speak. Key is also good with the particulars of daily noncombat life as a marine in Iraq, from the sort of food eaten to the interactions with other marines to the graffiti on the walls of the port-o-potty. But the show meanders and runs too long, and Key is not a good enough performer to bring to full life the other people he wants us to meet. By the time Key is sent home for hernia surgery, The Eyes of Babylon has lost its focus.

Key has a lot to say, and his writing is often strong. However, I would have been more affected by The Eyes of Babylon as a series of essays.

(press ticket, third row on the aisle)
Posted by Wendy Caster at 8:45 PM