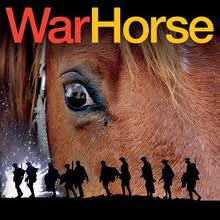 Okay, I am late to the rodeo. Nevertheless. . .

Imagine how much more brilliant Lion King could have been if Julie Taymor had spent even a fraction of her time during the development period focusing on what the actors behind the masks were doing. War Horse offers a powerful argument for equal time on both sides of the mask, all credit to directors Marianne Elliott and Tom Morris and the designers at the Handspring Puppet Company. Both represent thrilling concepts that enliven otherwise scant scripts, masking the deficiencies therein literally. Only War Horse forces the actors to inhabit the masks and not just relying on the masks to inhabit the stage.

The actors inhabiting the horses at the Lincoln Center Theater at the Vivian Beaumont are working as hard and providing performances as good as any I have seen on Broadway this season, and they end up not humanizing the horses but humanizing the humans who share the stage. I grew up around horses, was nearly thrown from one at a young age, and haven't had a lot of use for them since. My sister, however, speaks a language with her horses I will never understand and shares a bond, a deep connection and compassion she does not share with most strangers and reserves for relatively few whose names she knows. (If I and her horse had a broken leg and she were left with one bullet and a choice, the only thing I am certain about is she'll shed more tears over the horse's pain and whichever one she doesn't put out of its misery gets a visit from the vet.) I haven't seen a lot of that loyalty since I left the farm, but this production captures the flinches and whinnies and shadowing I've observed from a cantered distance in real life. The relationships created on stage were simultaneously true and real and theatrical.

But War Horse is as much about war as it is about horses--pro the latter and anti the former. It makes tangible that the damage of war is not collateral but brutal and personal. Without preaching, War Horse demonstrates that we are all beasts, discardable and dangerous in the eyes of an enemy. War is in some ways about blind allegiance, to country, to cause, and to comrades. Joey, the title horse, serves loyally, with the immediacy battle demands and, just like any soldier, may walk away from war wounded wanting no more reward than home and security with loved ones. War Horse is not anti warrior, just anti war.

The production transcends personal beliefs. It isn't trying to change your mind about war. Like all great theatre, it is most invested in taking you on a journey. And what a splendid journey it is. From the set and lighting design to the best use of a turntable I've seen in ages, if ever, to the haunting music and stellar cast, especially Peter Hermann, Alyssa Bresnahan, and Boris McGiver as humans and all of the actors who horsed around on stage (at the performance I attended: Stephen James Anthony, David Pegram, Leenya Rideout, Joby Earle, Ariel Heller, Enrico D. Wey, Joel Reuben ganz, Tom Lee, and Jude Sandy who did double duty as the best Goose since Top Gun).

I am now officially on board to see anything the Handspring Puppet Company mounts.