What were they thinking?

There are two ways to interpret this question. In the first, it's preceded by a silent "Are they nuts?" And that interpretation is certainly apt in relation to David Adjmi's relentless and unpleasant play 3C. 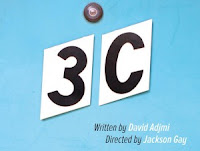 But in the second interpretation, it's a straightforward question. What were they thinking? For example, what did Rattlestick Playwrights Theater, the usually wonderful Bill Buell, and the impressive-even-in-this-mess Hannah Cabell see in this show that made them want to do it?

Maybe they fell for this description (from the press release):


The war in Vietnam is over and Brad, an ex-serviceman, lands in L.A. to start a new life. When he winds up trashed in Connie and Linda’s kitchen after a wild night of partying, the three strike a deal for an arrangement that has hilarious and devastating consequences for everyone. Or are they non-consequences?  Inspired by 1970s sitcoms, 1950s existentialist comedy, Chekhov, and Disco anthems, 3C is a terrifying yet amusing look at a culture that likes to amuse itself, even as it teeters on the brink of ruin.

However, that paragraph in no way describes the painfully overdone, cutesy, pointless, ten-minute-skit-stretched-to-ninety-minutes show performed tonight. The supposed Chekhov moments and existentialist comedy aren't there, and 3C is certainly not hilarious, amusing, or terrifying. Instead, the show's tiresome, heavy-handed takeoff of Three's Company tries to buy some significance through long moments of cast members sitting and staring grimly (long moments) and bits of confused sexuality. It's not enough. Director Jackson Gay might have helped by varying the pacing and lowering the hysteria a bit, but she went for a balls-to-the-wall approach that is, to coin a phrase, full of sound and fury, signifying nothing.

The set is nice. In a game called "Faces," where characters challenge each other to express various emotions, Hannah Cabell offers a lovely display of acting technique. Kate Buddeke manages some moments of real emotion as the miserably unhappy wife of the landlord. That's it.

(Oh, and if you want people to read up on your show, don't choose an Google-challenged name like 3C.)