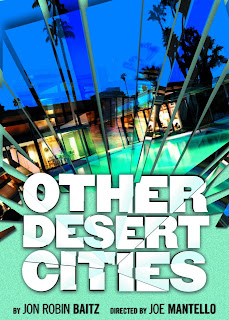 Sometimes, when partisan politics piss me off, I try--with increasing difficulty as I age--to see the issue from the other side. "They infuriate us as much as we infuriate them," I reason, "and they probably think about it this way while we're coming at it from this other way." This exercise usually doesn't help much, but at the very least, it does remind me that I am not alone in my own rigidity, stubbornness, or convictions about what I am sure is right and what I know is dead wrong. Sue me; I'm human.

So are all the members of the Wyeth family, portrayed with impressive sympathy and depth by Jon Robin Baitz in his flawed but compelling Other Desert Cities. The whole family is pretty solidified in their opinions--about themselves, their relationships, their politics, their worlds. The family elders, Polly and Lyman (Stockard Channing and Stacy Keach), are old-guard Hollywood Republicans who were dear friends with the Reagans, and who remain staunchly dedicated to the party and its ideals, even as those ideals have shifted since their beloved Ron left office, and even more radically since the turn of the century. They love but don't always understand their grown children, Brooke (Elizabeth Marvel) and Trip (Thomas Sadoski), a novelist recovering from a breakdown and the producer of a lurid tv reality show, respectively. Polly's sister Silda, a profoundly dysfunctional, if currently recovering, alcoholic whom Polly has taken care of on and off for much of her life, is living with Polly and Lyman as she adjusts to life just out of rehab (again).

Brooke has traveled from New York and Trip from LA to spend Christmas with Silda and their parents in their comfortable, sterile home in the Palm Springs desert. It is winter 2004, and the entire family is on edge. Silda, shakily sober at best, sleeps for much of the day and spends most of her waking hours biting the hands that feed her. Brooke remembers well the yawning abyss of depression that she is only just learning to manage, and she, like the rest of her family, is terrified that she'll lose control again. Trip, the family's youngest and perhaps most even-keeled, is sick of falling prey to the same old family dynamics he encounters every time he comes to visit. And Polly and Lyman refuse, as usual, to acknowledge or discuss their eldest son, Henry, who committed suicide after his own descent into mental illness resulted in the accidental death of a stranger. Yet their refusal to do so is about to become a real problem: Brooke, after years of inactivity, has finished a memoir about Henry, her family, and his death, and she wants their blessings before she publishes it, first in excerpted form in The New Yorker, and later as a high-profile book.

This, the central plotline of Other Desert Cities, failed to work for me. The way the death of a child impacts a family is certainly fair game for theater (and film, for that matter): Rabbit Hole comes immediately to mind, as does Ordinary People. Other Desert Cities doesn't add much to the canon on this front. When it comes to matters regarding Henry (oops) and Brooke's fairly damning memoir about him and his family, the show feels stagy, formulaic, and heavy handed: Secrets Are Revealed. Characters Reel From Shocking Realizations. Every Character Gets A Big Moment; Screaming Is Optional. There Is Anger And Retribution, But Finally Forgiveness, Acceptance, and Healing. Fade Out. Curtain.

Yet another problem I initially had with the show ended up striking me as one of its playwright's more insightful strokes. The actors seem to have been directed (by the mighty Joe Mantello) to relate to one another in a more superficial, forcefully cheery manner when they're all together--and especially when they are around Polly, whose almost plastic smiley face and cheerfully teasing humor disguise a deep-seated defensiveness, iron will, and ability to switch from warm and motherly to icy and threatening in a heartbeat. As the action unfolds, however, and the scenes focus on relationships between various family members, the overarching family dynamic gives way to more complex, subtle interpersonal relationships.

And in the end, it was the subtleties of Other Desert Cities that won me over. Playwrights can so often, so easily, insinuate their own politics or worldviews into their works, by punishing or judging their characters' ideals, choices, behavior. Baitz, however, refuses to do any of that here, which strikes me as the biggest strength of his play. I didn't always agree with his characters--their opinions about their family, their pasts, their politics, their values, their (sometimes downright petty) grudges. But I rather liked them all, flaws and all, and that didn't change as the action continued and the melodrama built. I believed the Wyeths, all of them, as I believed in their increasingly nuanced, complicated interactions with one another. They end up making perfect sense if you've ever spent more than five minutes with a family--any family--in your life. After all, families can rip themselves apart over things way pettier than the death of a child. Some family members are closer than others, and all family members relate to one another in unique ways. When it comes to families, the whole is not typically the sum of its parts.

The nuances extend, in Baitz's play, well beyond his Wyeths, and out into the rapidly changing, increasingly partisan, increasingly frightening world. The show's not called Other Desert Cities, nor set in 2004, for nothing. Outside of Lyman and Polly's generically tasteful, stubbornly isolated home in Palm Springs are bigger wars being waged, other people's children dying, the American party system slowly imploding. These bigger parts of the picture are not discussed terribly deeply by the Wymans during their time together, but it's clear that they all feel the world around them, and each of them has their own solidified, unchanging opinions about it, as they do about one another. They might not ever change, really, any of them, but Baitz gracefully forgives them for being so endlessly, stubbornly, even smugly rigid in their own perspectives--and thus, for being people--nonetheless.
Posted by lizwollman at 1:10 PM