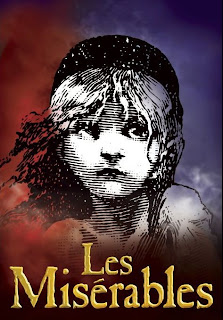 Les Miserables - favorite of professional traveling companies and high schools - has been the holy grail of community theatre shows. Those waiting for the full version to be released outside of the professional realm knew it would happen eventually, but consistently feared they would be too old to be Javert or Fantine by the time it happened.

It was with this reverence that Eastlight Theatre in East Peoria, IL became the first community theatre in central Illinois to receive the rights to the full version of Les Miserables. The cream of the crop auditioned for this momentous occasion, and 52 were chosen for the regional premier. I heard about it during callbacks from a good friend who was being considered for the part of Thedinaire. By the time he had been cast as Bamatabois (the creepy and violent gentleman who assaults Fantine), I was already on Eastlight’s website tracking down tickets.

Of course, when a school attacks the high school edition, the audience enters the theatre with the assumption that what they’re about to see will be a smaller scale and possibly a B-version of the show due to the editing and inexperienced talent.

But what about a community theatre? Can actors who hale from everywhere between Lincoln, IL to the tiny farm town of Henry, IL, and spend their days in non-acting pursuits, really do justice to this seminal classic?

The answer, it turns out, is a resounding yes.

Regular attenders of Peoria-area theatre know there is some great talent in the area, but even the veterans won’t be prepared for the professional quality set, the astounding lighting system and design, and the anomaly of 52 solid voices without the typical community theatre problem player (you know....‘that person’....the one you dig through the program to figure out how they’re related to the director or the board to explain how they made it into the cast).

Stand out performances are difficult to pick in such a cast, but definitely include Jason Morris as Javert. His rendition of ‘Stars’ is breathtaking, and when he and Roger Roemer combine on ‘The Confrontation’ with perfect rhythm and timing, it is a thing of beauty. Don’t get me wrong, Roemer’s Jean Valjean is good, but he takes time to get into the character whereas Morris comes out swinging. Mary Kate Smith’s ‘I Dreamed a Dream’ as Fantine is similarly awe-inspiring, which makes her attack by the most terrifying Bamatabois imaginable (played by George Maxedon) even more tragic.

Stephanie Myre and Adam Sitton also give performances worth paying attention to as Eponine and Enjolras respectively. Myre’s voice during ‘On My Own’ and ‘A Little Fall of Rain’ is phenomenal, and her spunkiness makes Eponine come alive. Sitton’s Enjolras is hypnotic and his voice has all the strength, beauty, and vigor that the leader of a revolution should. There’s something about the first few words of ‘Do You Hear the People Sing?’ that always brings tears to my eyes when sung well, and Sitton’s performance is no exception.

A surprisingly standout performance comes from Stephen Peterson as Grantaire. Grantaire isn’t a character that’s talked about a lot, but Peterson’s anger and power makes him an actor hard to look away from. He is the dark part of the revolution - the serious (yet often drunk), realistic balance to Enjolras’s optimism, and Peterson plays this depth perfectly.

Back to Roemer as Valjean - he definitely holds his own and serves well as the story’s foundation. His voice is both solid and beautiful, but his emotions and actions don’t always match up in the first act, and there are points where it feels like he’s moving from one side of the stage to the other solely because he’s been directed to do so. But, that is all but forgotten as he starts singing ‘Bring Him Home’ in the second act. This is where Roemer really comes into his own with the combination of perfect tone and emotion. The night I attended, the audience began their loud and long applause before the final note was complete, and continued long after the orchestra started the next bit of transition music.

At heart, the power of Les Miserables comes from the strength of its ensemble. Although every voice onstage is impressive, there are times during some of the ensemble pieces in the first act that seem like the arrangements could be preparing to fall apart. Yet, the last note of ‘One Day More’ as the first act ends is so incredible, so perfect, so powerful and potent that there is no doubt these musicians have everything under control.

It might be obvious that I’m avoiding talking about two of the main characters. Honestly, it’s no fault of the actors that I don’t jump to talk about Jarod Hazzard’s Marius and Rebecca Meyer as Cosette. Hazzard and Meyer are solid in their roles and have lovely voices. Personally, though, Marius and Cosette have always bothered me. Perhaps it’s because I adore Eponine so think Marius is a fool for ignoring her. Perhaps it’s because they fall in love so fast after seeing each other for two minutes. Perhaps it’s because Cosette’s part is really high and I’ve always enjoyed alto parts more. Regardless, the whole love story kind of annoys me, so I never get caught up in ‘A Heart Full of Love’ until Eponine starts singing, and I have little emotion during the wedding.

That to say, Hazzard’s rendition of ‘Empty Chairs at Empty Tables,’ complete with Robin Hunts’s blocking and Steve Cordle’s lighting, is astounding. So much so that my notes, which tend to be decently extensive and detailed, simply say ‘Empty Chairs!!!! Holy freaking crap.’ Eloquent, I know (then again, my note about ‘Bring Him Home’ simply said ‘Yes. That. Yes.’ So, maybe eloquence isn’t my strong suit). In a show with too many highlights to talk about, Hazzard’s haunting and emotion-filled vocals make ‘Empty Chairs’ a moment that’s hard to forget.

Director Robin Hunt definitely had her work cut out for her and she delivered. The talent on stage, high quality technical aspects, and a functional and beautiful set show she is definitely worthy of the challenge. The talent of musical director Mitch Colgan also shines from the breathtaking orchestrations of the keyboardists and percussionists, to the outstanding vocals.

The technical aspects of this show are stars in their own right. The lighting design and set, specifically, are hard to look away from. The set includes the classic Les Miserables elements - giant turn table, constant haze, the flying bridge and backdrop, etc. Yet, the most incredible part of the set, by far, is the barricade. It’s made of 3 different parts, turns 360 degrees, and both sides are climbable. It’s the kind of barricade that’s an impressive feat for any theatre, but put it in the scope of a community theatre and it is particularly outstanding.

The lighting system and design is another feature that is incredibly extensive for a community theatre. Without going into all the nerdy details, the lights are very cool, emphasize dramatic and emotional moments very well, and add a backdrop of professionalism to the experience. Amazingly, Eastlight’s production has one man who is responsible for both of these areas and more. Steve Cordle claims the titles of executive director, technical director, set design, lighting design, sound design, and sound operator. One of these positions is a big deal. To tackle all of them in a production this large and momentous is unheard of.

However, there were some technical problems the night I attended - some that were probably one-time things (like a stage hand getting caught in the light a couple times while putting  the barricade in place), and others that were choices (such as some lighting cues that were programmed to come on or off suddenly when a fade would have suited the mood of the scene better). The sound was the biggest program of the night, though, with a couple bouts of feedback from the mics, some levels that made it hard to hear over the amazing orchestra, and an instance where an actor’s mic didn’t get shut off once he was backstage.

Yet, part of the charm of this particular rendition is that it is still community theatre. There are times where transitions are awkward, lapel microphones are grabbed when a fight breaks out, and actors look slightly startled when the turn table stops moving at least once. Instead of this ruining the ambience of the story, however, it adds to the awe of what these incredibly talented locals are pulling off. If I can sit in a high school auditorium and be astounded by the likes of Jason Morris and Mary Kate Smith to the same degree I’ve been astounded by the voices of professionals singing the same complicated music, there’s something very special happening. The audience seemed to agree as they were already on their feet before the cast even began their bows.

All that to say, it’s more than worth your time and $19. There’s an old adage that if something can play in Peoria, it can survive elsewhere. Les Miserables at Eastlight Theatre definitely plays in Peoria.

And if you’re no where near Illinois, here’s a funny video made by the cast to ‘One Day More.’