The Etiquette of Death 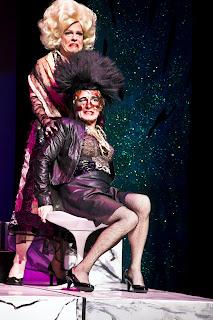 The premiere of Chris Tanner’s heavy-handed farce, The Etiquette of Death at the Ellen Stewart Theatre, explores the darkness and despair—and the occasional humorous moments—the loss of life brings: a fitting topic to close La MaMa’s 50th Anniversary season since Ellen Stewart, the “mama” of La MaMa passed away last year.

Tanner, part of La Mama since 1979, creates a collaborative on death with 20 other writers and composers, including Penny Arcade, Angela DiCarlo, Jeremy X. Halpern (also the keyboardist), John Jesurun, Penny Rockwell and Tony Stavick. In Etiquette, death becomes an extravaganza: a variety show of sorts, chock full of glittery costumes, cross-dressing, and, song and dance. Amid all this absurdity, the authors attempt to imbue meaning by offering insinuations, conversations, and soliloquies on the importance of appearances, class, the horror of AIDS, and the sadness of loss, among other topics. The ambitiousness of the project, ultimately, generates an overall messiness where narratives and characters stay unconnected and, often, seem erratic.

The loose storyline introduces Joan Girdler (Tanner), a blonde bee-hived Mary Kay incarnate with sometimes questionable ethics, who is caring for her dying son (Brandon Olson) as she struggles with her own Stage 4 brain cancer diagnosis. Girdler, a regional sales manager of Etiquette Cosmetics, also hosts a TV show that offers etiquette and makeup tips. Death (a leather clad, Cher-haired Everett Quinton, who also directs the musical) is a big fan of hers. Scattered throughout the main action, “death” vignettes showcase ancillary characters discussing gangrene and the importance of bringing the right food to a Southern funeral, a chorus of dancing pigeons, and, a funny bit where two characters eat in a restaurant run by Death’s hench-bitches (Machine Dazzle and Matthew Crosland in brief costumes that showcase their to-die-for legs). What the sideshow of anguish and provocation means isn’t always apparent: Why are the pigeons eating Kentucky Fried Chicken? Why use a Grecian-looking set with columns and a bridge that entering actors must duck under? Why portray Isis, an Egyptian goddess who protects the dead, as Death’s cohort? Often, Etiquette offers more shoulder shrugging “huh” than “a-ha.” moments.

The performances span from the good, the bad, and the ugly. Quinton, best known for his work during his two-plus decades with The Ridiculous Theatrical Company, plays death with a campy fierceness, yet still manages to instill a human fragility in (her? him?) during a hopeful but disastrous makeover. Greta Jane Pedersen embodies Isis as a modern-day cabaret chanteuse with a pixie cut and bright red lipstick, who simultaneously channels Norah Jones, Edith Piaf, and Natalie Merchant. Pedersen’s singing mesmerizes and makes Etiquette’s two-hour-and-a-half run time bearable.

Choreography, though, by Julie Atlas Muz offers uninspiring efforts that invoke a high-school dance recital and, often, the singing is off-key. Sound problems in the performance I attended periodically made dialogue and lyrics indiscernible. With clichéd lines such as, “Without death, life would lose its poetry” and the tongue-in-cheek finale chorus, “We’re all gonna die,” this might not be a loss

The Etiquette of Death plays from June 14-July 1 at the Ellen Stewart Theatre at La Mama.

Posted by Sandra Mardenfeld at 2:34 PM