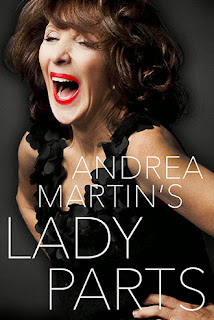 It should come as no surprise that Lady Parts, the recently released memoir from Broadway favorite Andrea Martin, is often hysterically funny. Along with Martin Short, Catherine O’Hara, and John Candy, among others, Martin is one of the original SCTV cast members, memorable for creating Edith Prickley and impersonating everyone from Indira Gandhi to Liza Minnelli. She has two Tonys on her mantel, winning her most recent one for last year’s gravity-defying turn as Berthe in Pippin (a role she’s currently recreating, for a short time, on the national tour). On screen, she’s known for scene-stealing turns in films like My Big Fat Greek Wedding and Hedwig and the Angry Inch. Yes, Martin’s comedy credits are legit.


What you might not expect--at least at first--is the unflinching candor with which Martin approaches some of her life's greatest struggles. The daughter of loving but distant parents, she recounts what it meant to realize, in her fifties, that her father had never given her any positive reinforcement, much less complimented her success. "I could not remember ever having an in-depth conversation with my dad," she writes. "I had never been comfortable revealing how I really felt or who I really was for fear of being criticized." Yet Martin understands and empathizes with her father's reticence, capturing with a gimlet eye how hollow it felt to finally stand up to him: "My dad's vulnerability was heartbreaking. In that moment...I was sorry I had confronted him. I wanted to retract everything I said."

Martin is equally bracing when discussing the chronic singlehood she's experienced since her divorce in the early nineties (after receiving one too many well-meaning questions about her personal life, she wrote her friends a mass letter entitled "Why Aren't I Dating?") and her decades-long struggle with bulimia. She remembers those she's lost, from John Candy ("He was exactly as you would like to think he was. He was exactly that guy") to her first husband, an early AIDS casualty. When, fifty-five and sober, she embarks on her first romantic relationship in years with a man half her age, she recounts their early dates with her trademark humor. "As much as I needed a bottle of vodka," she tells us, "I made two cups of peppermint tea for yours truly, Miss Havisham, and her twenty-eight-year old date." The relationship lasts a year, which Martin chronicles with tender humor and real affection.

Of course, there's plenty of pure humor. Martin light-heartedly addresses why she flies to Atlanta to get her hair done; the squirrel epidemic in Toronto, where she lives; and her potentially irrational devotion to astrology. She's not above a fart joke or a crack about old age. Yet her book is far more than a collection of anecdotes and vapid insider stories, which is why it works.

Show business memoirs are a dime a dozen, but they're rarely this good. Come for the jokes. Stay to be moved.
Posted by Cameron Kelsall at 3:46 PM