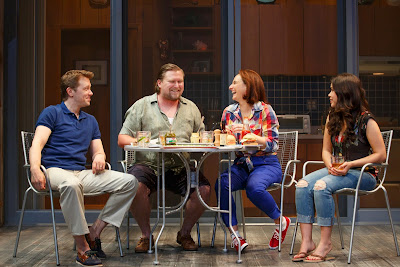 photo: Joan Marcus
Terrence McNally’s Lips Together, Teeth Apart was written at the height of the AIDS epidemic, and premiered Off-Broadway in 1991. The original production—which starred Nathan Lane, Swoosie Kurtz, Christine Baranski, and Anthony Heald—was an instant smash, running for over a year; an LA production, with Lane, Andrea Martin, and John Glover, was also very successful. The work of a gay author who would go on to write several plays about AIDS from a gay perspective, Lips Together is unique—both then and now—for portraying the experience of a disease so often linked with the gay community through a heterosexual lens. Some might even call the play a precursor to McNally’s enormously successful, similarly-themed Love! Valour! Compassion!.

Lips Together was set to make its Broadway debut in 2010, via the Roundabout Theatre Company, but that production was derailed just weeks before it was set to begin previews when its star, Megan Mullally, abruptly quit. (Rumors at the time swirled that Mullally had tried to get her co-star Patton Oswalt fired, in order to replace him with her husband, Nick Offerman). The piece is now receiving its first New York revival under the auspices of the Off-Broadway Second Stage Theatre. As with any once-current play that has aged into a period piece, there are more than a few creaky moments. And while this production is smoothly directed (by Peter DuBois) and features at least one stand-out performance, it does not make a convincing case for the play as an enduring masterpiece.


The action takes place over a Fourth of July weekend on Fire Island, a vacation community largely associated with gay men. Sally Truman (America Ferrera) has inherited a vacation home from her brother, who recently died of AIDS, and she’s trying it out with her husband, Sam (Michael Chernus). Also in attendance are Sam’s sister, Chloe Haddock (Tracee Chimo), and her husband, John (Austin Lysy). The two sets of husbands and wives could not be more different: Sam is a schlubby everyman, while John is a preppy headmaster at an exclusive Connecticut boys’ academy; Chloe, a community theatre star, is as brash and high-strung as painter Sally is reserved and contemplative. The mismatched personalities—not to mention the fact that all four of them are carrying their fair share of secrets—make for an interesting portrait of family and marriage.

Clocking in at nearly three hours, over the course of three acts, the play is long and involved. It is also one of McNally’s most stylistically complex works, relying heavily on internal monologues (delivered periodically throughout the play), diegetic music (everything from the quartet from Cosi Fan Tutte, which opens and closes the show, to the overture of Gypsy, which Chloe hilariously misidentifies), and overly theatrical pacing. Acts One and Two feature some terrific writing, but it all largely deflates in the rushed, tying-up-loose-ends final act. In the last forty-five minutes, the play manages to feel both hurried and never-ending. It’s not helped by the fact that what might have come across as biting social commentary twenty-five years ago now reads as little more than quaint.

Chloe is a big, showy star role, and Tracee Chimo gives a big, showy star performance. After seeing her do similar work with similarly outsized characters in Bad Jews and Bachelorette, I’m starting to think it’s something of a calling card for this particular actor. Yet that doesn’t diminish the electric immediacy of her performance here. From her first line, she has the audience eating from her hand, and she retains that control throughout the performance. When Chimo is onstage, it doesn’t seem to matter if she’s the one speaking or not—your attention is drawn to her.

Though Ferrera seems tentative in Act One, she picks up speed in the subsequent acts and ends up giving a rather compelling performance. Sally is the most difficult role to pull off—she’s the least outwardly passionate of the three characters, though it should be clear how deeply she feels things. Ferrera excels at communicating this. Unfortunately, neither Chernus nor Lysy seem to be on the level of their female counterparts. With beer belly and untamed beard, Chernus may look the everyman, but there’s something slightly too refined in his carriage. Lysy simply comes off as smarmy, which is definitely one of his character’s traits—but not the only one.