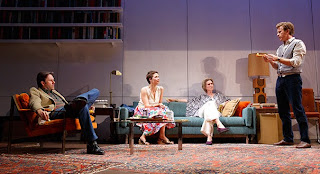 photo: Joan Marcus
The Real Thing, Tom Stoppard’s popular romantic comedy (if it can be called that), is back on Broadway in a starry revival from the Roundabout Theatre Company. This is Roundabout’s second Stoppard offering this season; their Off-Broadway space is currently housing the first major New York staging of his 1995 play Indian Ink. Regular readers of this blog will remember that I favorably reviewed that production last month. Unfortunately, despite a strong central performance from Ewan McGregor, in his American stage debut, this outing is far less successful.

I’ve always felt that, at its essence, this play could be simply explained as a love story about people who have no real concept of love. They think they know what love is, yet their views of it are cloudy by so many outside factors: chiefly sex, jealousy, and art. At the beginning of the first act, Henry (McGregor), a playwright, is married to Charlotte (Cynthia Nixon), an actress currently appearing in his current play. Charlotte’s co-star is Max (Josh Hamilton), who’s married to Annie (Maggie Gyllenhaal), with whom Henry is having an affair. Annie is also an actress, though throughout the play, she seems more focused on the political cause célèbre of a Scottish soldier imprisoned for committing arson. By the beginning of Act Two, Henry and Annie are married, and she is pushing him to ghost-edit a political play the soldier, Brodie, has written while in prison.

As with everything in his life, Henry examines love intellectually. His inability to complete a play for Annie leads him to question whether or not he truly loves his second wife. In turn, Annie possesses an earthen quality that feels like a more refined answer to free love. Whether or not she’s entirely faithful to Henry seems of little importance to her, if not to him. In these respects, both McGregor and Gyllenhaal carry of their characters well. That McGregor’s style is slightly less refined than the actors who have preceded him in the role (Jeremy Irons, Roger Rees, and Stephen Dillane) adds a refreshing new layer to his characterization. Henry does, after all, worship the American pop music of the sixties but can’t tell Verdi and Wagner apart—not exactly what you’d expect from a cerebrally highbrow Brit.

Nixon appeared in the original Broadway production of this play back in 1984, when she was eighteen. She played the role of Henry and Charlotte’s daughter, Debbie (here played, unmemorably, by Madeline Weinstein), and famously pulled double-duty by simultaneously performing in David Rabe’s Hurlyburly. Now Charlotte, she’s unfortunately not well-cast. Whereas Charlotte is supposed to be wise and wry, described by Stoppard as a woman who “can take even better care of herself,” Nixon is mostly wan. Her second-act scene with Henry, which should strike sparks, mostly limps. Nixon is a fine actress, but she’s saddled with a role that’s not a fit. Someone like Elizabeth Marvel or Jessica Hecht would have been a better choice.

This revival was directed by Sam Gold, who’s had great success with contemporary works like Fun Home, The Flick, and Circle Mirror Transformation. Unfortunately, his track record with revivals isn’t nearly as strong. As with his productions of Look Back in Anger and Picnic (both also for Roundabout, where he is the Resident Director), he’s taken a nearly perfect play and unnecessarily attempted to “improve” upon it. Chief among this production’s regrettable issues are the needless musical interludes, performed throughout by the cast. While they manage to show off Gyllenhaal’s lovely voice (seriously, she could do a musical), they don’t add to or deepen any part of the story. Gold should just stick to the script—or maybe cede the script to a different director.