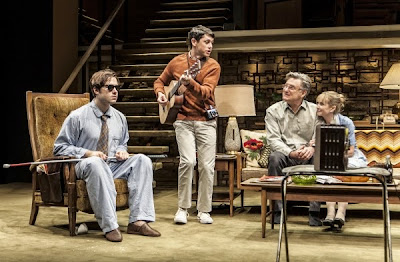 photo: Monique Carboni
I wasn't around forty-three years ago, when David Rabe's Sticks and Bones premiered at Joseph Papp's Public Theater, the second work in his trio of plays about Vietnam (the other two being The Basic Training of Pavlo Hummel and Streamers). It quickly moved to Broadway, where it earned the Tony for Best Play of 1972 over a boulevard comedy by the then-almighty Neil Simon. It ran six months and was adapted into a TV movie for CBS, a controversial move that resulted in over half of the country's affiliates refusing to air the film. No, I wasn't around when this play premiered, but I can imagine the impact it had, because the first New York revival (being presented by The New Group at the Signature Theatre complex on West 42nd Street) stick packs one hell of a wallop.


A combat veteran himself, Rabe was demystifying the experience of war in real time, using drama and artifice as his weapons of choice. Of the three major plays he wrote about Vietnam, Sticks and Bones is the most highly-stylized, which makes it the most difficult to stage well. Thankfully, director Scott Elliott and his mostly irreproachable cast have created a production that makes for this being one of the twentieth century's most important works of art about war. Rabe's frame is The Adventures of Ozzie and Harriet, that delightfully bland television show about the suburban life of the Nelson family in 1950s America. (At times, I couldn't help but think of Vanya's monologue from Christopher Durang's Vanya and Sonia and Masha and Spike--"It was boring, but we watched it anyway!"). Ozzie and Harriet (played here by Bill Pullman and, in her first New York appearance in twenty years, Holly Hunter) seem to be living an idyllic mid-century life with their son Rick (Raviv Ullman), which is quickly upended when their older son David (Ben Schnetzer, in a stunning debut performance) returns, blind and paranoid, from war.

Rabe needles at the perceived perfection of middle-class life, and at the construction of American culture in general. Ozzie, the seemingly unimpeachable paterfamilias, has secrets, which Pullman reveals to sometimes terrifying degree in a series of chilling monologues. The ideal housewife, Harriet has problems with her nerves. David's return throws the entire purpose of her being into question: if she cannot mother her war-scarred son, then what is the point of her existence? Hunter hauntingly conveys both the woman Harriet conveys to the world--when the family priest (played by Richard Chamberlain, the ensemble's only weak link) comes for a visit, she brings so many layers to five little words: "Oh, Father Donald, bless me"--and the tortured soul that lies beneath. Ullman's Rick couldn't be more sharply drawn--his mild-mannered likeability slowly and staggeringly giving way to an unsettling denouement. I can't imagine three actors better-suited for these roles.

Schnetzer's David is a portrait of a boy-man returned from war both broken and menacing. He carries with him the memory of Zung (Nadia Gan, in a brilliant, nearly wordless performance), a Vietnamese girl he might have loved, who floats around the stage like a haunted memory hanging in the air. David's experiences force his family to confront their own troubled past and their engrained prejudice. David is easily the most difficult role to pull off, given that he often acts as a mouthpiece for the author's ideas about a number of themes: war, American culture, religion. Yet Schnetzer brilliantly captures all of the character's wild emotional swings, and never makes the writing feel didactic. He surely is one to watch.

The play is sometimes funny, often alarming, and organically discomfiting. I can count on one hand the number of times I've seen a play shake an audience up the way this one does. There were a number of walk-outs at intermission (and the first act is tame, compared to the second), and by the end of the play, a moment of stunned silence preceded the curtain call's strong applause. As the lights came up, the man seated next to me turned and said, "I'm speechless. I can't remember the last time I felt this way." If that's not a ringing endorsement for the power of art, I don't know what is.

[Running time: just shy of three hours, with one intermission. Second-to-last-row center, TDF.]
Posted by Cameron Kelsall at 9:40 AM