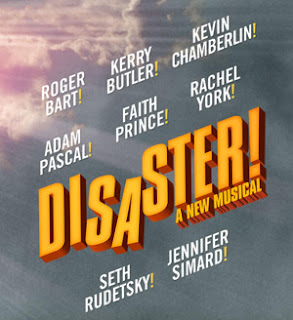 Disaster! totally isn't one. Sure, it could maybe be shorter by about fifteen minutes, and maybe a little sharper in spots, but I saw the third preview and it was already pretty damned funny. How could it not be, really? Look at the cast list to the right. Just look at it. The show is chock full of Broadway people who aren't just famous at this point but the creators of their very own goddamned personae. How could a show with a cast this awesome possibly suck? HOW COULD IT?

I suppose it could if it took itself too seriously, but believe me, it isn't a dumbass, so it knows way better than to do anything that boneheaded. Disaster! has its own long history at this point: it was first performed at a benefit in 2011, and has popped up Off Broadway a whole bunch of times since then, with rotating cast members including greats like Mary Testa, Mary Birdsong, Judy Gold, and Annie Golden. The cast has been a little more Broadway-fied now that Disaster! has landed at the Nederlander, but there are a few holdovers from its Off Broadway days, including Seth Rudetsky, the co-creator (along with Jack Plotnick, who directs, here), who has appeared in every production as noted disaster expert Professor Ted Scheider. Also, Jennifer Simard, who I want to own stock in, reprises her role--more on her and the rest of the cast in a second.

At this point, jukebox musicals have been around long enough that the subgenre has developed tentacles, and by this, I mean that there are almost as many kinds of jukebox musicals as there are people to see them. They run the gamut from high-concept ones like The Donkey Show (1999) and Movin' Out (2004) to comparatively straightforward biographical tributes like Jersey Boys (2005) and Beautiful (2014) to looser, more self-referential ones like Rock of Ages (2006) and Xanadu (2007). Some jukebox musicals are nostalgic, high-concept, biographical, self-referential and wacky all at the same time. I wouldn't call Disaster! high concept or biographical, but it is certainly as loose, wacky, and self-referential as representatives of this subgenre come.

Taking as inspirations 1970s disaster films like Airport (1970), The Poseidon Adventure (1972) and The Towering Inferno (1974), spoofs of that genre (Airplane!, 1980), and, of course, classic stage musicals, Disaster! is set in New York City in 1979. Specifically, it takes place on a huge, floating casino, the owner of which is the sleazy Tony (Roger Bart!), a womanizing huckster who has cut every corner he can in the launching of his enormous, floating money-pit. The casino is thus attached to a pier that is unstable, has all kinds of contraptions in it that aren't up to code, and no fire doors or anything helpful like that. This would probably all be less of a problem were said casino not floating right over a faultline. Noted disaster expert Professor Ted Scheider (Seth Rudetsky!) is on the scene because he has reason to believe that a major earthquake is going to hit New York at any second, and he's certainly not keeping quiet with the warnings about what might happen. What's a cast to do? Why, blitheley ignore all his concerns and boogie on up to the casino, of course!

While Disaster! offers no fire-and-brimstone preachers or champion ex-swimmers, there are plenty of other stock characters that you will recognize if you've seen or heard tell of even one disaster film in your life. There's Maury and Shirley (Kevin Chamberlin! Faith Prince!), the older, hard-working, loving couple who are finally out for a great time together even though one of them is secretly deathly ill and about to die at any second. There's Jackie, a spacy lounge singer (Rachel York!) who is desperate to find love and a father for her twin boy and girl (Baylee Littrell! And Baylee Littrell!). On the waitstaff is Chad (Adam Pascal!), whose active sex life does not compensate for his broken heart. Little does he know that he is about to run into Marianne (Kerry Butler!), his one true love, who left him at the altar to pursue a career in journalism. There's Levora (Lacretta Nicole!), a one-hit wonder now down on her luck, and Sister Mary (Jennifer Simard!), a nun with a guitar (natch) and a Secret, Dark Past. They all climb aboard the casino eager to drink, boogie, gamble, and have a totally awesome time that is completely safe and that in no way involves natural disasters, dismemberment, electrocution, puncturing, or any sort of unpleasant, untimely death.

Of course they get on the damn barge, because otherwise there'd be no show, and thus no excuses for any of the characters to bust out, with satisfying frequency, into groovy '70s hits for what are very often totally stupid, dipshit reasons, and I mean this in the best possible way (Tony to his head chef: "Get rid of that lousy cold buffet! Make some roast beef and chicken! I want.....SOME HOT STUFF, BABY, THIS EVENING! I'M LOOKING FOR SOME HOT STUFF, BABY, TONIGHT!" Chad and Marianne when they realize that the only way to free themselves from a locked room is through a trapdoor above them: "Oh! We need to . . . KNOCK THREE TIMES ON THE CEILING...!").

There's all this, and much, much more: puppet pirhanas and rats, assorted human dummies, and a running bit that has Faith Prince winking suggestively at random men, thrusting her pelvis uncontrollably, and spewing unspeakably vile invective without warning--sometimes all at once. There's a wonderful, ludicrously contrived tap number near the end of act two, plenty of opportunities for the female cast members to remove articles of clothing for no reason, and a tastelessly hilarious scene in which someone tosses body parts off the casino and into the water while tenderly singing "Three Times a Lady."

The whole cast is game--I am sure a sense of humor was a prerequisite for even getting an audition for this one--but the prize for committment to the bit goes to Jennifer Simard, whose relentlessly flat affect is truly a thing of brilliance. She made me laugh my ass off all the time and I hope her role helps her get many others.

I also hope Disaster! finds a big, loyal audience, whether on Broadway or on tour. Broadway is basically the only place to go lately if you want to make a national name for your show at this point, but I fear that this production might be a tough sell nonetheless. Disaster! is a silly, goofy, terrifically fun production, but it lacks the weight and intensity of hot tickets like Hamilton and Fun Home, the slick polish of School of Rock, Wicked, and The Lion King, and the star power of The Color Purple. I had a blast--and I'm hoping to bring my daughter and her friend back, because I think they, too, will be enormously entertained by the over-the-top-stupid brilliance of this one. But I am not sure how tourists forking over more than $100 a ticket will feel about the fact that the biggest special effects involve some moving pillars and a gag in which Roger Bart walks around with his arms shoved into two stuffed sharks. Only time will tell, I guess.

Meanwhile, if the idea of arm sharks strikes you as even remotely as funny as Faith Prince shouting "penis hole" at her stunned, disbelieving husband, then believe me when I tell you to get your ass to the Nederlander asap, because you have clearly picked the wrong week to quit sniffing glue.