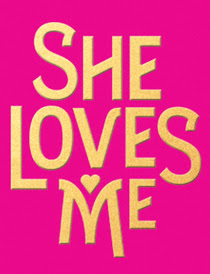 She Loves Me is my favorite musical, hands down. The book is funny and drum-tight; the score is comprised of one sparkling number after another. It has no fewer than eight knockout roles. Savvy theatergoers can perhaps understand why I was filled with a fair amount of trepidation when it was announced that Roundabout Theatre Company would be producing a new revival of the musical. Although they gave us the acclaimed 1993 Broadway revival -- which ran for a year and netted Boyd Gaines his second of four Tonys -- their track record with musical revivals has been dubious (remember Bye Bye Birdie?).

I needn't have worried. Seen at the third preview on Saturday night, this production is firing on nearly all cylinders.

The story of she loves me should be familiar to fans of the film The Shop Around the Corner...or, more likely today, You've Got Mail. Georg Nowack (Zachary Levi) and Amalia Balash (Laura Benanti) work as clerks at Maraczek's Perfurmerie, where they are always at each others' throats. Little do they know that they are secretly corresponding with each other as part of a lonely hearts' club, trading romantic letters under the handle "Dear Friend." Most of the musical's humor derives from the audience knowing the couple's predicament before they do.

Scott Ellis' production derives from a 2011 benefit concert, which featured most of the current cast. Levi and Benanti are both new to this production (Josh Radnor and Kelli O'Hara played he roles in the concert), and they're both delightful. Levi is an ebullient actor with a megawatt smile. He doesn't have the largest or most beautiful voice, but he compensates with smart and elegant musicianship. Nearly two decades into her career, Benanti continues to surprise. Her Amalia is not only gorgeously sung but comically precise.

The jewels of the supporting cast are Gavin Creel, Jane Krakowski, Michael McGrath, and Nicholas Barasch, who play the other clerks at Maraczek's. Creel's voice is pure silk, and he has suaveness to spare as Steven Kodaly, a smooth-talking lady-killer with a few secrets himself. Krakowski brings the comic skills she's honed after a decade with Tina Fey to Ilona, who's on the hunt for a husband. McGrath is his dependable self as Sipos. Barasch -- who is still in his teens -- shows off a strong voice and serious physical comedy skills as Arpad, the upwardly mobile delivery boy.

Byron Jennings is still finding his footing as Mr. Maraczek (he was a late-stage replacement for Rene Auberjenois), but I think he'll get there. Peter Bartlett is giving the same cloying performance he always gives as The Headwaiter -- it's the production's only real strike. The ensemble, to a person, is flawless.

Ellis' production is fleet and funny, with gorgeous sets (by David Rockwell) and costumes (by Jeff Mahshie). Warren Carlyle's stylish choreography is exactly what this show needs. Studio 54 is a dead space for music, but the orchestra (under the baton of the legendary Paul Gemignani) sounds better than ever.