Dr. Seuss, renowned children's author, managed to tuck away some pretty radical thoughts in his accessible, funny, tightly rhymed, and sweetly illustrated books. Seussical, the musical based on a number of his stories, goes even a little further. Individual thought is cherished, even if it annoys the people around you ("oh, the thinks you can think"). War is stupid (does it really matter which side the bread is buttered on?). All people are important ("a person's a person, no matter how small"). You have much to offer just the way you are (as Gertrude learns when she goes to extreme measures to impress Horton). And love is triumphant, even across species. (Horton the elephant and Gertrude the bird decide to help their elephant-bird deal with, uh, cultural challenges by having Horton teach it about earth and Gertrude teach it about sky.) 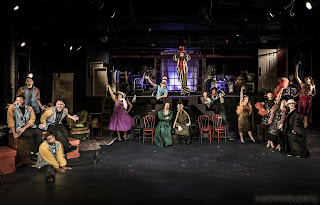 Seussical doesn't particularly push these messages. Instead, in the strong production currently at the Gallery Players in Brooklyn, it presents an energetic party, with much singing, 17 actors playing over 70 characters, a stage full of inviting props (and many hats), and tons and tons of energy. Seussical is the sort of show where you frequently notice that you're grinning.


Seussical gallops along, with Horton hearing a Who and also egg-sitting for Mayzie, the party bird unenthused about motherhood. The Cat in the Hat--or many hats--acts as ringleader, as the Sour Kangaroo criticizes, the Wickersham Brothers monkey around, the Grinch is surprisingly cheery, General Genghis Khan Schmitz plans to battle for the rules (no matter how dumb they may be), and JoJo strives to find a place where he can be his nonconformist self. Along the way, they meet many Seussian animals, sing some wonderful songs by Lynn Ahrens and Stephen Flaherty, and dance up a storm. The show is loose, creative, and a great deal of fun.

The Gallery Players Seussical could use a tad more focus and polish. Of deeper importance, some of the performers lack the ability to project. One of the Gallery's major strengths is the unmiked singing, but it does require actors who can be heard to the last row.

Overall, however, Seussical is yet another enjoyable Gallery production. Take your kids. And if you don't have kids, go anyway.