It's easy to assume--especially in diverse, concentrated and comparatively liberal areas--that at this point in our country's history, coming out of the closet is just no longer a very big deal. But of course it is: even with all the freedoms in the world, being honest with yourself and your loved ones about who you truly are can be pretty tough stuff. That's the premise of Straight, a compelling, affecting new play by Scott Elmegreen and Drew Fornarola that is currently running at the Acorn. 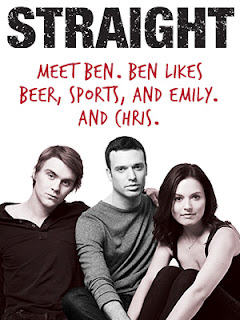 The plot: Ben (Jake Epstein) is an investment banker in his mid-twenties who went to Penn and is now living in Boston. He is quiet, brooding and something of a bro: his apartment is all college banners, sports posters and takeout menus; he often forgets to eat, but his fridge is full of beer, and he has a makeshift liquor cabinet with a bottle of Jaeger in it. He also has a girlfriend, Emily (Jenna Gavigan), with whom he's been involved since college. She lives across the Charles River from him as she finishes her doctorate in biogenetics. Since they both work long, weird hours, and since they don't live together, they see one another only a few times a week. This arrangement--which, it is clear, is entirely Ben's call, and not even a teeny bit Emily's--allows him to pursue furtive trysts with men, but also to convince himself that doing so is just no big deal. It's not like it has anything to do with his relationship with his girlfriend, and he can totally break the habit easily, whenever he wants to, if he wanted to.

But when he hooks up with Chris (Thomas Sullivan), an undergraduate whose slacker affect belies surprising depth, intelligence, and insight, Ben starts having a rougher time convincing himself that he can remain safely in the closet for the rest of his life. It's not just that the sex is so much better and more frequent with Chris than it is with Emily. It's also that Ben is kind, funny, relaxed, smart, and interested in all the stuff Ben is into--and thus not just someone to screw, but instead to fall head over heels in love with. As Ben and Chris connect with and confide in one another, Ben's iron-clad grip on the life he has decided is best for him begins to loosen.

Straight is a little clunky in passages--there's a lot of exposition at the beginning that is not entirely well-masked. The acting is a little tentative in parts, which certainly works when Ben and Emily are interacting but not quite as well when Ben and Chris are. And while it ends up serving the purpose of the play, Emily is a little underwritten in comparison with the men, whose emotional depths are more carefully plumbed. Still, Emily's hurt and confusion at Ben's insistence on constantly keeping her at just a little too far a distance is palpable and real and sad. Straight is an important play: it reminds us that while contemporary sexuality is far less culturally rigid--or dangerous--than it was even a decade ago, coming to terms with oneself is not automatically easier or less terrifying as a result.
Posted by Liz Wollman at 8:13 PM