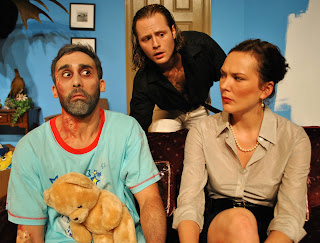 The Amoralists' current production, Amerissiah, is the story of a man who thinks he's god, his struggle with cancer, and his impressively dysfunctional family. It sort of believes in miracles, and it sort of doesn't. Starting with the huge moose head that dominates the set, much is left unexplained. The characters in Amerissiah live at the top of their lungs, brandishing their desires like pulsating neon swords. This high-energy, even cartoonish writing and acting worked to great effect in the Amoralists' wonderful previous production, Happy in the Poorhouse. In Amerissiah, however, too many of the characters and situations are ugly, from unsuccessful toilet humor to a father-daughter team who embezzle millions of dollars by neglecting to purchase the health insurance they promised their employees. I guess Amerissiah fits perfectly with the company's stated mission of producing "work of no moral judgment." But is that goal desirable? Is it even possible? For me, it was hard to care much about Amerissiah, and I guess that is at least partially a moral judgment.
Posted by Wendy Caster at 5:52 PM