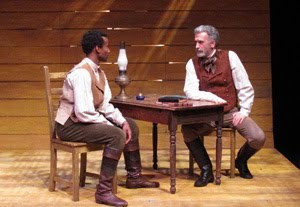 Playwright Charles Smith faces three challenges in telling the story of John Newton Templeton, the first African-American to attend college in the Midwest, in the 1820s. First, bio-plays are difficult to pull off, as most people's lives don't fit a dramatic arc. Second, idea plays can end up pompous and/or dull. Third, Templeton's life was epic, but theatrical economics require plays to have small casts. Smith mostly overcomes these constraints by choosing an extremely dramatic section of Templeton's life and by giving each of the other two characters--a minister and his wife who take Templeton in--believably different points of view. Despite Smith's skill, however, the play cries out for other characters. Showing Templeton interacting with his classmates and perhaps with friends or a girlfriend would give the play a chance to breathe--and would take the pressure off the other two characters to represent Templeton's whole world. Also, the first act drags. However, the characters are affecting, the discussions are compelling, Smith's writing is compassionate, and Templeton's story horrifies, fascinates, breaks your heart, and inspires, sometimes simultaneously. Sheldon Best as Templeton gives a performance of great delicacy.
Posted by Wendy Caster at 10:32 PM

A great production ably directed by Michael Greif. Production values are excellent as well as a strong cast led by Ruben Santiago Hudson. Probably one of the best Shakespeare in the Park productions in decades. If there is anything that I think need more work it would be the moment when the statue comes to life--it's a bit underwhelming and also Linda Emond's prison speech, a gifted actress, but she says the speech so slowly that her speech patterns are so evident. It just seemed a little insulting to the audience that she takes her time, as if saying "I need to slow down for you to understand Shakespeare"... Otherwise, I think this production is better than the other offering which is Merchant of Venice.

Hi. I okayed this comment so that it would be seen, but it was attached to the wrong show. You might want to repost it. Wendy