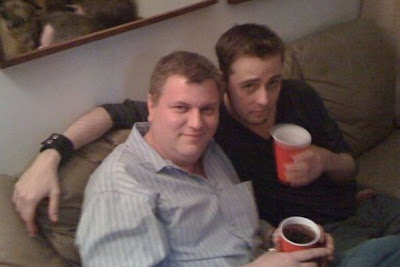 Patrick and David getting their Tony Awards on.
Show Showdown has lost a cofounder and a dear friend. Patrick Lee, officially the most theater-obsessed person I have ever met, passed away earlier this week. His love of all things theater was infectious and his supportive voice via Show Showdown, Just Shows to Go You, and TheaterMania was a valuable contribution to the New York theater community.

I met Patrick while waiting tables at West Bank Cafe. I spotted his Playbill and struck up a conversation. I bragged that I'd seen over a hundred theatrical productions in the previous year. He bragged that he'd seen over two hundred. What?? Game on. We began Show Showdown-ing in 2006 and I quickly discovered what a formidable opponent he would turn out to be. Within weeks he'd seen twice as many productions as had I, and his succinct, haiku-esqe capsule reviews could capture a production's essence in just a few carefully worded sentences.

At the time, Patrick was considering a second career in documentary film and was taking courses at NYU (his first: television production). However, shortly into our race, Patrick confided in me that he had found his true calling in theater criticism and promotion. Over the next few years, he successfully created for himself a truly fabulous life in the theater community that he so adored.

Patrick Lee was one of the most intelligent people I have ever known. He had a gourmet sensibility in terms of theater, film and any other mode of art you could throw at him. He was a generous listener and a captivating conversationalist. His favorite play of all time was Uncle Vanya. His favorite musical was My Fair Lady. His favorite showtune was "Ol' Man River."

I will miss my show buddy a great deal.

Wow... for all the uncountable times I talked to him about theatre, I don't think I ever knew that his favorite musical was My Fair Lady, one of mine as well. How I wish he were still here so I could hear his analysis of it... just one of many conversations we won't get the chance to have.

I keep hearing in my head "Where has the time all gone to?/ Haven't done half the things we want to..."