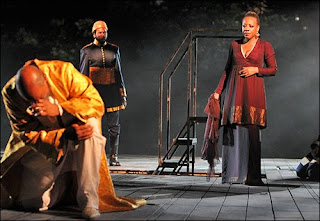 One of Shakespeare's problem children, this late romance (based on Robert Greene's novella "Pandosto") is currently receiving a lovely production at Central Park's Delacorte Theater under the sensitive, focused direction of Michael Greif. While the story primarily revolves around Leontes (Ruben Santiago-Hudson, quite compelling), a king who believes that his devoted wife, Hermione (Linda Emond) is unfaithful, this particular staging is notable for the strength with which its secondary material is imbued. The film and television actress Marianne Jean-Baptiste makes an electrifying New York stage debut as Paulina,a noblewoman who makes it her life's mission to inform the king of his errors, and Emond herself--despite being a decade too old for the role--brings more pathos to the wrong queen than any actress I've ever seen. The play also offers a great deal of comedy, with Hamish Linklater (so memorable in last year's Twelfth Night) and Jesse Tyler Ferguson as adept clowns. More than almost any other production I can remember in the past ten years, Greif's mise-en-scene uses the park setting to its advantage in an extremely beneficial manner; it bodes well with the ethereal, almost otherworldly tenor of the text. He also manages to stage the difficult, haunting final scene to brilliant effect. There are very few levels on which this Winter's Tale doesn't work, and it's an absolute must for New York Shakespeare lovers.
Posted by Cameron Kelsall at 8:41 AM