Watching Clare Lizzimore’s play Animal is an odd experience. You never quite know what’s going on, because Rachel, the main character, is unraveling, and partially because parts may or may not be real, or symbolic, or hallucinations. Unfortunately, the show—at least at the early preview I saw—doesn’t inspire the audience to spend much energy figuring things out. 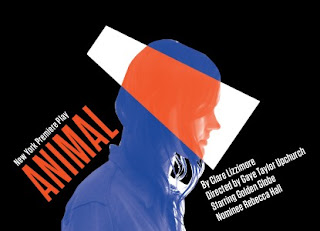 (I don’t usually present my opinions as “the audience’s.” However, a lot of people fell asleep during the show. In the first row, an older man kept conking out, and his wife kept waking him up. Sometimes she’d have to nudge him a few times to get him to regain consciousness, and then he'd fall back to sleep anyway. She only gave up when she too fell asleep. It can’t have been fun for the actors.)

So, back to Rachel. She’s tired of taking care of her husband’s mom and actually commits elder abuse. She flirts with a crook who breaks into her home. She refuses to cooperate with her therapist.

Then it turns out that she isn’t really her husband’s mom's caretaker; instead, she has an infant child. The crook who breaks into her home is a hallucination with amazing abs. The therapist is real, but, in order to maintain the play's mystery, Lizzimore has him fail to mention that Rachel has post-partum psychosis until the big reveal at the end. The play would be way more interesting if we knew the diagnosis sooner. As it is, the play varies from boring to vaguely annoying. Only the scenes with the therapist work. (And there’s no way that anyone is letting this woman take care of a kid!)

Rebecca Hall is onstage throughout, talking and talking. It’s an impressive performance, but it’s also a lot of work for little return. Greg Keller as the therapist does a fine job. And the young Fina Strazza, as one of the more interesting hallucinations, gives a poised, subtle performance. The other actors are hard to judge as their roles are odd, at best.