In spring of 1973, I saw a sweet new musical called Shelter written by Gretchen Cryer and Nancy Ford, who would later write I'm Getting My Act Together and Taking it on the Road. I liked it so much that I gave up a ticket to see Alan Bates in Butley so that I could see its final performance, which was all too soon after its first. (It had 16 previews and 31 performances; for the New York Times review, click here.) 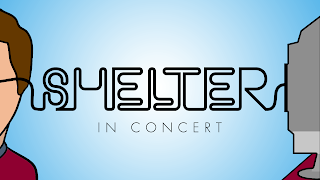 Decades later, I remembered only a few things from Shelter: the two songs on the 45 that was the only record released from the show; that Marcia Rodd was wonderful; and that the show presciently featured a man more emotionally involved with his computer than the real world.

Last night I was able to see Shelter again, in a concert version at 54 Below, starring Cryer's son Jon, of Two and a Half Men fame. And it was a delightful evening, full of wonderful songs and lots of laughs.

But oh, I wish Gretchen Cryer would rewrite the book, which wants us to believe that not one, not two, but three women are in love with Michael, the repressed man ultimately comfortable only with his computer, yet perfectly able to have sex with any female who passes by. It didn't help that Jon Cryer played Michael blandly, leaving a hole in the middle of the show, but even with a more charismatic lead, the show would still be about three women circling an idiot man, which is just not that interesting. It not only fails the famous Bechdel Test, but it also would probably disappoint Heather Jones, the lead character in the ur-feminist musical, Getting My Act Together. I would love to see what Gretchen Cryer would do with the story now.

Whatever Shelter's limitations, it was a gift to get to see it again, and I tip my hat to Steven Carl McCasland and James Horan, who produce the Second Act Series at 54 Below, giving neglected shows their moment in the spotlight. I also very much enjoyed Sally Ann Triplett as Maud, Jeff Kready as Arthur, the Computer, and Alyse Alan Louise as Wednesday November.

(I also enjoyed the Peeketoe crab fritters and plantain chips with guacamole.)