On her website, Alison S.M. Kobayashi describes herself as an identity contortionist. This is, as it turns out, a pretty accurate description for the highly interdisciplinary work she does, which lies somewhere between curating and performance art, with a little anthropology, visual art, filmmaking, and playwrighting tossed in at various points for good measure.

As an interdisciplinarian myself, I not only relate to never quite fitting into any number of different camps, but I also was particularly taken by Kobayashi's Say Something Bunny! Especially since that piece, which she has created and in which she performs, is one I have my own weird interdisciplinary relationship to. 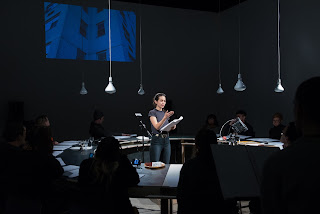 Alison contacted me sometime after Hard Times was published. Someone had given her a wire recorder purchased at what was presumably Newburge's estate sale. In it were various recordings Newburge had made of his family when he was in his late teens and early 20s, and Kobayashi was in the process of creating a show around them. I shared what materials I had about him, and forgot all about the exchange until learning that her show was up and running in New York, after a successful stint in Toronto. How could I miss it?

I'm so glad to have seen the finished product. Say Something Bunny, performed in a cozy and inviting Chelsea gallery, is not only visually appealing, but it's also gentle, smart, and warm. It simultaneously paints a vivid portrait of a family and brilliantly reflects the artist's obsession with--even love for--said family, which she has partly and painstakingly documented, and partly invented. Every family, I think, should be so brilliantly and lovingly reincarnated.

Styled like a table reading and drawing from a script made largely of transcripts from the wire recordings, Say Something Bunny is less about Newburge himself than it is about the people on the tapes he made (an assortment of family, neighbors, and friends), the time and places in which they lived (the 1950s through the 1970s; various points in New York City's outer boroughs), and the artist's own interpretations of their lives, relationships, and fates. It is an impressive, extraordinarily well-researched and executed piece, that manages as well to be deeply touching and quite funny.

I fully admit that my initial curiousity about the piece was based largely on its relationship to my own work. It's not often, after all, that a short section in your obscure academic book about obscure 1970s musical theater helps inform someone's curatorial performance-art piece--or that said book actually makes a cameo appearance in said curatorial performance-art piece! But Say Something Bunny is an amazing accomplishment all on its own. Experience it if you can through July. While you're there, say hello to David and his extended family for me. I've never met the lot of them, but I'm quite sure they'd like to know that they're being richly, respectfully rendered by a fellow traveler--especially one who is so very good at what she does.