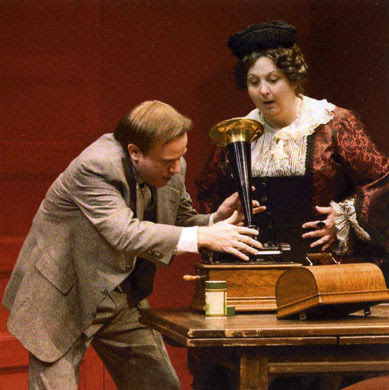 Photo/Monique Carboni
There's very little tension in Sallie Bingham's A Dangerous Personality, a major dramatic stumbling block that the show never quite manages to get over. However, Martin Platt's clever direction manages to pull off a comedy instead, a fittingly ironic fate for the late Madame Helena Petrovna Blavatsky, whose struggle to establish the Theosophical Society ended with her being debunked as a fraudulent mystic. From the gilded yet frayed Lamasery (richly designed by Bill Clarke) to a sweltering house in the Hindu Quarter of Bombay, characters keep standing up for New Age idealism (religion without the Church) only to ultimately stoop to comedy. Theater's a bit of a trick, anyway, and for what it's worth, the finale proves that Mrs. Bingham has something up her sleeve after all.