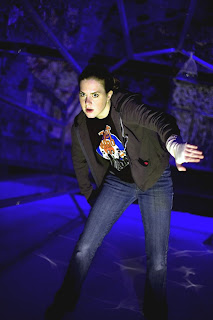 Jason Stuart's absorbing solo play (confidently and engagingly performed by Dana Berger) is centered on the real life story of a five year old girl who died inside a laundromat washing machine. More than one interpretation of the facts is offered, as a handful of characters process the tragedy, but the play is interested less in asking us to decide what happened and more in depicting - sometimes with humor, sometimes with grave seriousness, but always with humanity - the profound effect that the loss of one life has on the community. That's a theme that could potentially be precious, but not here in this lively and intelligent play which strictly avoids sentimentality and instead strives for (and achieves) a cumulative emotional power.
Posted by Patrick Lee at 12:53 AM