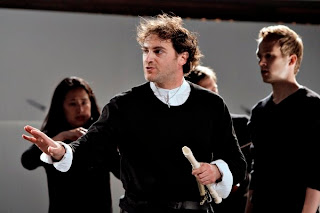 Michael Stuhlbarg's indulgent, often bizarre performance as Hamlet is mostly of the foot-stomping tantrum variety, the Danish prince as neurotic Oedipal child. He grandstands and gesticulates but he has no more weight than a pest: this is a Hamlet where you couldn't care less about the main character. The production, directed by Oskar Eustis, offers a surprise or two - memorably, the play within the play is performed here with puppets, and Ophelia distributes stones rather than flowers when she goes mad - but in the absence of dramatic momentum it quickly becomes boring.
Posted by Patrick Lee at 12:53 AM