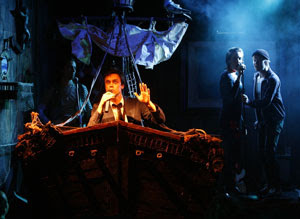 Photo/Carol Rosegg
Jollyship the Whiz-Bang is a riot from start to finish: if anything, its subtitle ("A Pirate Puppet Rock Odyssey") is a bit of an understatement. Think Avenue Q as performed by Tenacious D with a healthy dose of irreverence by way of Family Guy, and if that doesn't have you rushing to buy a ticket, you might as well stop here. Jollyship uses the rock music to remain serious, even as it plunders the depths of self-satire and goes overboard (in a good way) with its crass puppets. Nick Jones and Raja Azar have been performing since 2002, and though they've added members to their crew (most excitingly, Steven Boyer, a very funny vocalist, and an endearing crab), the play seems to have grown organically: in other words, the comedy flows naturally, jarring only in the sense that you'll be convulsing with laughter. Sam Gold helps to think both inside and outside the box, tightening the parody as well as the prosody, and while the crew may never reach Party Island, the audience certainly will.

[Read on] [Also reviewed by: Patrick]
Posted by Aaron Riccio at 9:00 PM