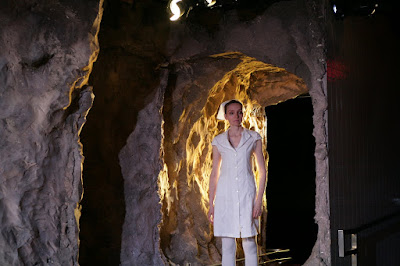 Photo/Dixie Sheridan
The saying goes "if it ain't broke, don't fix it," so the fans and fanatics drooling each year over Axis Theater Company's serial drama Hospital are not likely to be disappointed with this year's four surreal, comic installments. But from a critical point of view, it's hard to process what, other than a ridiculously experimental showcase, Axis is after. Watching Hospital 2008 episode one is akin to grabbing 35 minutes from the middle of a David Lynch film: the narratives are loose and disconnected, the actors are disturbingly present (yet blurred), and the ambiance (nicely evoked here by Kyle Chepulis's literal cavern of a set and David Zeffren's selective lighting) is unsettling. The trouble is that this serial version lacks the deepening compulsion of Lynch's craft: nothing within this segment ties in to anything (unless you count cryptic references to "an apartment"), and with such a short run-time, the mood of the piece never pulls the audience under.