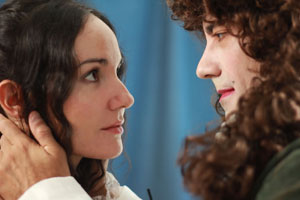 Stephen Jeffreys' comedy-drama is a delicious throwback to Restoration times. With Cromwellian Puritanism a thing of the past, the return of the monarchy was an optimal time for an omnisexual, charismatic, downright outrageous character like John Wilmot, Second Earl of Rochester, to barrel into the history books. Eric Tucker fleetly directs a nimble cast of well-drawn characters, vividly evoking the scramble that goes on backstage at a theater, the clash of wits at the public house, and carefree rutting in a dark prostitutes' alley.

Patricia Duran is wonderful as a proto-feminist Mrs. Barry; Tom O'Keefe is superbly in-the-moment in the dual roles of Rochester's wry friend Charles Sackville and the smug star actor Harry Harris; and the fine Libby Arnold as the prostitute Jane has a lovely scene battling an annoying inclination to actually care about her client the Earl. The production's flaw arises from the Earl's complexity. Not having seen the play before—not even the movie version with Johnny Depp—I can't say how others have approached the lead role, but Joseph W. Rodriguez fails to entirely convince, because his Rochester lacks the charm the real Earl must have oozed.

The same cannot be said of the overall production. Rambunctious and clever, it has many virtues. Above all, the play transports us to a lofty realm of wit and ribaldry very few modern playwrights even attempt,

Excerpted from Theater Review (NYC): The Libertine on Blogcritics.
Posted by Jon Sobel at 4:35 PM