Elling. Elling is a little play. A very little play. A teeny-tiny, itsy-bitsy play. Brendan Fraser and Denis O'Hare play odd-couple roommates, both recently out of a psychiatric hospital. Every once in a while the play seems about to veer into being original or dramatic, but the moment passes. (For example, when the O'Hare character loses his most precious possession, he doesn't notice.) Elling would be a not-unpleasant evening in the theatre if tickets were $25 or less. They are not $25 or less. (Fraser is fine and O'Hare is wonderful--he can't seem to help it.) I saw Elling in an early preview, but I doubt that it will get any better; it is what it is. 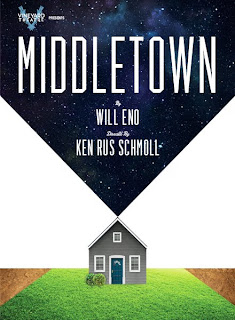 cky to Be Me: The Music of Leonard Bernstein. This tribute to Leonard Bernstein was wildly uneven, with highlights provided by Donna Murphy, Victoria Clark, and Kelli O'Hara. The lowlight? The sound was terrible. Sitting first-row-center orchestra, I could barely hear many of the singers, even when they were miked.

Middletown. I saw this at an early preview and had a mixed response to it. Author Will Eno seems to be going for an Our Town sort of vibe, but more complex, and the play only works sometimes. However, while I never felt completely involved, the show has stayed with me.
Posted by Wendy Caster at 8:17 PM