One Night With Joan 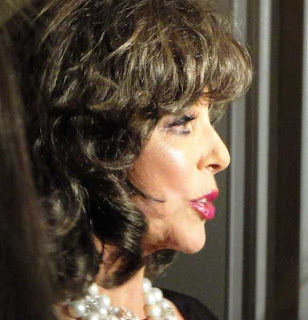 Joan Collins is a force to be reckoned with. She turned down Darryl Zanuck's (staggeringly coarse) sexual advances, even though she knew she might be risking her career. She responded to a Joan Crawford snub by mentioning that Collins' mother was such a Crawford fan that she named Joan after her. When her then-husband lost his job, she went back to performing to support the family (they had a total of six children), starring in such classics as The Stud and The Bitch. She wore her hair with bangs and did so many nude scenes that Oscar Levant commented that the only part of her he hadn't seen was her forehead. Oh, and her first husband tried to sell her to a sheik.

These are only some of the many stories that the effervescent Collins shares in her night of reminiscences at Feinstein's at the Regency. Still glamorous in her late 70s (and married to a man in his 40s), she is entertaining and in her own way a role model: she began fashioning her life to her own design in the days when women were supposed to force themselves into society's pre-assigned template, and she still lives life on her own terms.

On Tuesday Collins clearly had opening night jitters, and she would do well to tell her stories rather than act them. She also might get more laughs by underplaying rather than overplaying her punch lines. But, hey, she's Joan Collins. And if you're a fan, you'll have a great time.
Posted by Wendy Caster at 1:16 PM

She's a very witty writer, as well. I wish I could go.