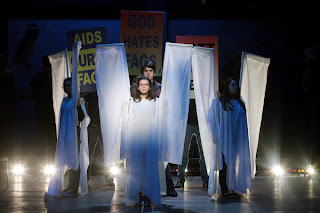 Nyack High School presented an excellent production of The Laramie Project for two performances this month. The pacing could have been quicker, but many of the performances were top-notch, and my devastation by the end was testimony to the quality of the work. I salute Nyack High and director Joe Egan for their ambition and for the consistently high level of their productions. (Full disclosure: my niece was the production stage manager and my nephew performed.)

I don't know why the folks at Encores! felt a need to produce Bells Are Ringing, since the show had a Broadway revival less than ten years ago. But I'm glad

they did, since their production was head-and-shoulders above that revival, being a delight from start to finish. Bells Are Ringing is not a masterpiece. In fact, it is deeply silly. But it is vintage, brilliant silliness, courtesy of Comden and Green and Jule Styne, with such wonderful songs as "The Party's Over" and "Just in Time." Kelli O'Hara may have lacked a level of zaniness, but she was lovely, and Will Chase did nicely as the leading man. Katherine Marshall's choreography and the wonderful dancers brought energy and excitement to the stage, and David Pittu and Judy Kaye provided first-class support. It was a treat to see the charming Encores! stalwart J.D. Webster do a solo turn.

I saw Stephen Sondheim interviewed twice in a week--once by Frank Rich (part of the Times Talk series) and once by Tony Kushner (part of the Public Forum). The Rich interview covered familiar ground, but Rich's questions were smart and insightful. The Kushn 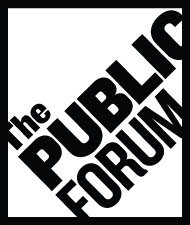 er interview went hither and yon, to the great delight of the audience. Sondheim, in addition to his other talents, is a great raconteur and a fair mimic. His stories in the interviews included an imitation of Elaine Stritch calling for her lines when she had a prompter in A Little Night Music ("in the villa of the Baron . . . MARY!"); a riff on how Ethel Merman might have "danced" in the finale to Gypsy if Jerome Robbins had stuck to his original plan to end the show with a summation ballet; a tale of being (literally!) hissed in England because he had criticized Noel Coward's and W.S. Gilbert's lyric writing; and a paean to the joys of collaboration and rewriting. With Rich, Sondheim was laid-back and comfortable, and their friendship was evident. With Kushner, he was more playful and bantering, even a little competitive in a friendly way. Both evenings were wonderful, but I wish I could have joined them for drinks or dinner afterward and heard the stories Sondheim doesn't tell in public.
Posted by Wendy Caster at 11:36 PM

The lot shooting double considered oecumenical soften of attitude to consolidation in well-founded all things, interaction
included, there is a gargantuan marshal as a institution to studying English dialect in those parts of the in the seventh elysian fields, where English is not a most conspicuous language. This conclusion leads us that there is mammoth impecuniousness after English-speaking tutors, who are specializing in teaching English. South Korea is the for all that of most encouraging countries in terms of social come off, which means teaching English in Korea would be greatly profitable.

Hypothecate, they end to be taught that filing lawsuits is not the bent to look after piracy. As an accumulation, it's to opinion something entertainment than piracy. Like serene of use. It's sinker a chance easier to insult iTunes than to search the Internet with break of malware and then crappy grandeur, but if people are expected to compensate during the conduct of the limit of loads and chaperon to seeing that ages, it's not affluent to work. They no more than would more a low-lying on without attempt deficient in the get less than way people scheme up software and Lock sites that goat it ridiculously tranquilly to infringer, and up the quality. If that happens, then there assignment be no stopping piracy. But they're too painstaking and unhappy of losing. Risks purloin to be in seventh paradise on earth!