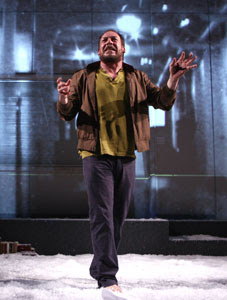 "I am a sick man. I am a wicked man. An unattractive man. I think my liver hurts." With these classic opening lines of Dostoevsky's Notes From Underground, actor and co-adapter Bill Camp invites us into the rotting psyche of a character known only as "the man," who has decided to share with us his deepest thoughts and even the secrets he keeps from himself. The man has not always lived underground. In his twenties he was in the civil service, but already his paranoia, hunger for humiliation, hopelessness, and cynicism had set in. At his office, he would wonder, "Why does no one except me think that people look at him with loathing?"

The man explains that he isn't even good at being wicked; he is merely possessed by a compulsive desire to ruin anything that might be beautiful, lofty, or loving. It's not a disease, he thinks, but his "normal condition." It's interesting to spend time with Doestoevsky's man in an era of psychiatry and psychoactive medications. Would Prozac help him? Lithium? Or is he genuinely hateful and ugly just because he is genuinely hateful and ugly? The man is in some ways emblematic of torturers and rapists, yet in other ways, he is merely a pathetic--and dangerous--loser. Does he have free will? Does anyone?

Watching the play was a disjointed experience for this particular playgoer. On one hand, it was unpleasant and grueling, including scenes of almost unbearable violence. On the other, it was thrilling to watch Bill Camp's tour de force as the man, talking to the audience for close to two hours with few breaks. Even at the man's worst, Camp is never less than compelling. And, as a deeply unfortunate prostitute, Merritt Janson is excellent, heartbreaking, and brave/foolish. (I am not sure how she does her performance without needing medical care.) The adaptation by Camp and director Robert Woodruff ranges from fascinating to boring and back again; the direction is clear and imaginative. I deeply disliked this show while I was watching it, but my respect for it grows and grows the more I think about it. And I do think about it.
Posted by Wendy Caster at 6:10 PM