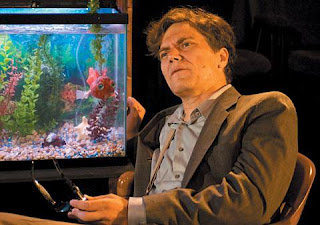 It is a theatre season of prodigious feats of memory. Mark Rylance in La Bete. Belle Caplis is Balm in Gilead. Bill Camp in Notes From Underground. And now Michael Shannon in Craig Wright's Mistakes Were Made (directed by Dexter Bullard). Shannon plays a theatrical producer who is juggling a moody movie star, a stubborn playwright, an unraveling business venture, and deep personal problems, all via an office phone that never stops ringing. Shannon is onstage alone for virtually the entire 90 minutes, yelling, cajoling, and pleading into the phone; chatting with his obese fish; and periodically melting down. Mistakes Were Made is generally lightweight, with occasional moments of extreme tone-deafness, as when a distant tragedy only matters to the extent that it affects the producer. However, there is much that is funny here, and Shannon's multifaceted, beautifully timed performance is well worth seeing. (Designer Tom Burch's set is a treat--make sure to check out the posters of the producer's previous shows, including one for Roseanne Barr and Erik Estrada in Cat on a Hot Tin Roof.)
Posted by Wendy Caster at 8:05 PM