A sendup of TV preachers, thinks I to myself. This must have something special, something to delight or at least surprise. No one would put together a show on such a hackneyed theme—would set out to lengthily mock the so-easily mocked—without a fresh approach, would they? Or at least some really sparkling creativity at the heart? 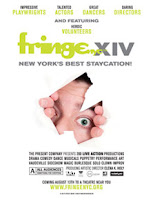 Alas. They would. The only hints of originality in this show came in a few of the fake local TV commercials shown on video between live segments of "Rev. Bill and Betty's" supposed cable access show. The two performers, Jen Ryan and Rik Sansone, are certainly stageworthy, and Ms. Ryan especially bites into her role with dastardly, pink-haired vigor. But their timing is all off, the best lines are thrown away out of context, and a lot of the jokes just don't make sense. (What Southern holy rollers would think to josh that "if there was survival of the fittest, how do you explain Larry King on television all these years?")

For humor to work it has to be rooted in something recognizably real. Martin D. Hill's script doesn't penetrate the innards of people like this to reveal what makes them tick. Rev. Bill and Betty's ignorant, twisted versions of the history of Judaism and Islam, which give the show its title, breathe a little life into the proceedings, but they don't last long. As a result the show is mostly bluster, artifically lightened with plays on words and bearing only intermittent, uncertain laughs.
Posted by Jon Sobel at 9:08 PM

Jon i just love to watch fringe some tv show are really great....