Fringe: When Last We Flew 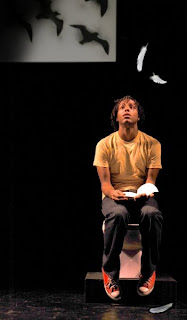 Harrison David Rivers's amazing When Last We Flew (directed by Colette Robert) weaves a pair of coming-of-age stories into a lyrical, touching, funny, even inspiring 2 hours of wonderful theatre (that's "wonder-ful" as in "exciting feelings of wonder"). Paul (the immensely talented and charming Jon-Michael Reese), an isolated gay teenager in Kansas, spends much of his time locked in the bathroom with a tattered copy of Angels in America, which is his lifeline, his bible, and his erotica. His mother (the lovely, subtle Karen Pittman), desperate to connect with him, tries to entice him out with plates of food, messages of love that Paul simply cannot receive. Natalie (the wry, remarkable Rory Lipede), the only African-American in an exclusive private school, is reaching the limits of her ability to remain well-behaved while being treated as "the black girl." Her mother (the intense yet perfectly restrained Tamela Aldridge) also wants to connect with her child, but more so she wants the intelligent, talented Natalie to have a life full of opportunities, even if she has to smother her along the way. When Last We Flew also features various friends, relatives, and other people, along with, yes, an angel. Particular kudos are owed Justin Gillman, as Paul's friend Ian; Gillman took over the role with less than 48 hours' notice yet performed with wit, deep emotion, and seemingly total ease. When Last We Flew left me with a kaleidoscope of images of despair, love, and glory, beautiful visions of people learning to be themselves and learning to fly.
Posted by Wendy Caster at 12:14 PM