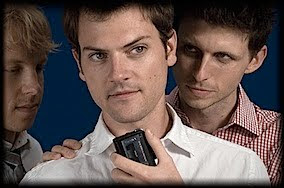 Open Heart, written and directed by Joe Salvatore, is an intriguing piece of docu-theatre about gay men living in nonmonogamous relationships. Salvatore interviewed 13 couples and a therapist/researcher, and Open Heart consists of the verbatim words--including "ums," stutters, and pauses--of six of the couples and the therapist. The men are engaging company, and their discussions of the advantages and disadvantages of their lifestyles run the gamut from calm reasoned theory to blunt "hey, this is what I want" type comments. Perhaps the most fascinating moments are those in which the men seem out of touch with their actual feelings and fears. The play is split into sections, like chapters, each of which begins with a brief video introduction of repeated images and words that act as chapter titles. The videos add little, plus they are uncomfortably loud and slow the pacing (the pacing in general drags and is sometimes awkward). The actors, who play three or four roles each, are downright amazing. Each interviewee is presented in compelling, three-dimensional, carefully delineated detail, and when the show is over, it's astonishing that there aren't two or three times as many people taking bows.
Posted by Wendy Caster at 12:22 AM