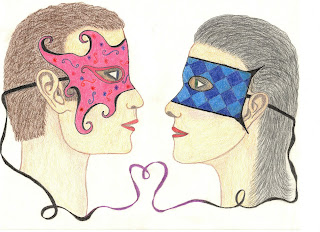 Everyone has bad days at work, and Two Gentlemen of Verona was one of Shakespeare's. The plot is dumb, the relationships arbitrary, the happy ending unearned. But the play has its charms, and the Judith Shakespeare Company maximizes those charms in its gender-bending production, playing through August 22 at the TBG theatre. With men in the female roles and women in the male roles, this Two Gents plays with Shakespeare's use of cross-dressing and comments on gender-based assumptions. It also allows both women and men to perform in roles that would not usually be available to them. The direction relies a bit too much on shtick, and the scene changes take too long, hurting the pacing of the play and making a long evening seem longer. Some performers are allowed to assume accents that make their dialogue unintelligible. But, on a whole, the show is well-directed and -acted. Interestingly enough, of the four leads, the men succeed better playing women than the women do playing men. I suspect that putting on a dress, feminizing one's movements, and affecting a high voice are more potent signifiers than putting on a tie, masculinizing one's movements, and affecting a low voice--particularly since many women now behave in ostensibly masculine ways. A woman in pants and a tie, sitting with her legs spread, can come across as just being a woman, perhaps a tomboy or lesbian, perhaps not. But a man in a dress comes across as either a drag queen or a woman; it is unlikely that he will be seen simply as a man in a dress. The cross-dressing might have been more effective if the women had bound their breasts; however, the full beard on the man playing Silvia (Hunter Gilmore) did not get in the way of perceiving him as a woman. In addition, while the women playing Proteus (Sheila Joon) and Valentine (Rachael Hip-Flores) were excellent, the men playing Sylvia and Julia were superb--particularly Alvin Chan as Julia, whose performance was both deeply funny and truly heart-breaking. Of the entire cast, all of whom did good jobs, it was only Chan who truly understood, felt, and conveyed being in a high-stakes reality.
Posted by Wendy Caster at 3:51 PM