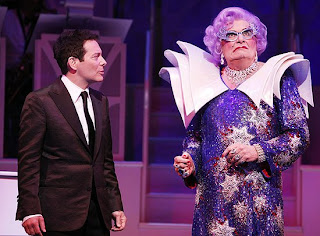 Even if you are a fan of both Michael Feinstein and Dame Edna, as I am, you may feel that watching them take turns on, fight over, and share a stage in their duo show All About Me is a case where two equals less than one. The reason these unique, considerable talents have been put together probably has to do with the economic realities of today's Broadway, because nothing else about pairing Feinstein's elegantly phrased romantic crooning with Dame Edna's acerbic shtick seems to make potential sense. It's like chasing champagne with Scotch all night - one kills your taste for the other. Faced with the task of writing material that makes an evening out of two people who don't belong on stage together, Christopher Durang has basically tried to capitalize on the mismatch by underlining it - the show's conceit is that both stars think they are in a solo show but, accidentally double-booked into the same theatre, are forced to share the spotlight. It's the kind of blatantly artificial set-up that went out with yesteryear's TV specials - Judy answering the doorbell for daughter Liza, who's dropped by "unexpectedly" to delighted applause from the studio audience. It takes a certain know-how to sell that kind of pretend, and neither Dame Edna - whose humor is caustic with a smile - nor Feinstein - so earnest when he tells us between his first songs that his childhood was lonely - are that brand of player. The thin plot business is interminable (save for a stage manager, played by Jodi Capeless, who sends the bickering stars off stage to entertainingly steal the spotlight for herself) - you tolerate it waiting for each star to do what he does best. Despite Dame Edna's more outsize stage personality, and her hoot and a half rendition of Beyonce's "All The Single Ladies" that is the show's comic highlight, it's Feinstein who more regularly satisfies his fans. His polished, often sublime American songbook vocal stylings, whether accompanying himself on piano or working the stage backed by the 14 piece orchestra, are swank and swell. (My one complaint: it's 2010, but even this out gay performer changes the "he" in Oliver!'s "As Long As He Needs Me" to "she".)
Posted by Patrick Lee at 8:05 PM