When The Rain Stops Falling 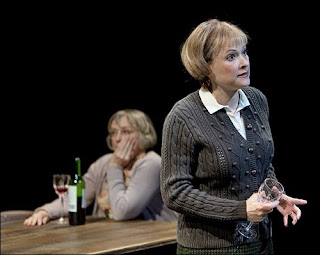 Andrew Bovell's dour, downbeat play, which flashes back and forward on several Anglo-Aussie family connections over four generations and eighty years, isn't for passive theatregoers; its ambitious structure demands patience and concentration just to connect who is who (despite the characters' family tree in the Playbill). While anything but formulaic, the structure is too clever by half: we're too often engaged with figuring out why the scenes are laid out as they are than with the emotional content. The reason for the challenging structure seems to be that it allows the playwright to delay the defining, key event that clarifies most of the play's characters, but to what end? Despite a sterling production (under David Cromer's direction) and many superb, detailed "kitchen sink" performances - particularly Mary Beth Hurt as an emotionally isolated alcoholic, and Victoria Clark as a wife slowly losing her sanity - the play is only involving as an intellectual puzzle.
Posted by Patrick Lee at 5:52 PM