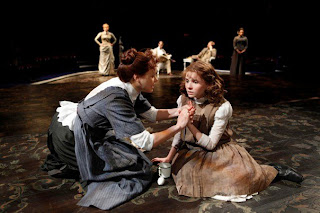 There's much to admire in this first Broadway revival of the Anne Sullivan-Helen Keller story - above all else a riveting performance by Abigail Breslin - but, as you've likely already heard, the staging is a serious problem. (It pains me to say it, as I thought director Kate Whoriskey's staging of Ruined last year was flawless.) Presenting this story in the round has to rank as one of the worst ideas in recent Broadway seasons - you can't very well have your deaf and blind central character crossing the room mid-scene so that the other half of the audience can see her, especially when so much of her stage business is sitting and writing letters into the palm of her teacher's hand. With so much non-verbal business, it's especially imperative that the audience be visually connected to the players. My view was so frustrating for the first act that I debated skipping the second, and I could spy seats that were far more problematic than mine. (I'm glad I stayed - no major obstructions to my view after intermission, and the play's final scene is as touching and effective as one could possibly hope.) The ideal seats would appear to be numbered in the 100s and in the low to middle 200s on the even side of the theatre. Sit there.
Posted by Patrick Lee at 1:38 PM