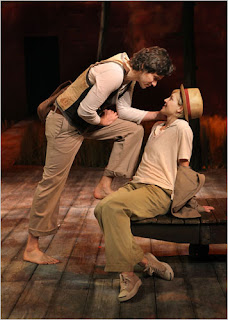 Last year, when everyone was raving about Sam Mendes' production of The Winter's Tale, I was imploring everyone and their mother to go see his staging of The Cherry Orchard. It was simply the best production of a Chekhov play that I'd seen in New York in over a decade. Once again, I find myself to be the contrarian voice: people are going crazy over his production of The Tempest, which I found interminable, while I am still in awe of his fresh, beautiful take on one of Shakespeare's most oft-performed comedies, As You Like It. Mendes manages to tap into the resources of subtext behind the playwright's comedic scenarios without sacrificing any of the wonderful, ebullient moments of hilarity. The cast is an embarrassment of riches: Juliet Rylance's perfect Rosalind, Christian Camargo's invigorating Orlando, Stephen Dillane's surly Jaques; even the tiniest roles are played with aplomb. Only one performance remains, this Saturday at 2. Don't miss it.
Posted by Cameron Kelsall at 12:31 PM