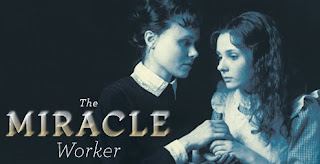 [spoilers below, though I imagine the odds of anyone reading this website not knowing the whole story are slim]

William Gibson's 1959 play, The Miracle Worker, is a bit creaky. Many of the characters are one-dimensional, and the father-not-respecting-the-son-until-he-yells-at-him subplot is the theatrical equivalent of color-by-numbers. Also, the Circle in the Square theatre works against the play. The actors have to carefully contain the physical scenes. The all-important (both pragmatically and metaphorically) doors are only frames within frames, which negates their power yet doesn't stop them from blocking the view of much of the audience. I and dozens of other people missed a chunk of the climactic scene because Abigail Breslin's back was to us (not getting to see the "waa-waa" moment is ridiculous and unacceptable, really). Whatever the limits of this production, however, the play still packs a wallop, and Alison Pill excels at depicting a young woman who has invented herself out of intelligence, anger, strength of will, and compassion.
Posted by Wendy Caster at 3:00 PM