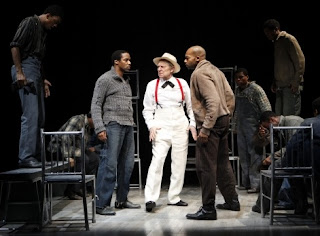 Even by the vaunted standards of other Kander and Ebb musicals, The Scottsboro Boys is an especially potent mix of bitter social comment and rousing showbiz razzle-dazzle. The real-life story from the Deep South in the 30's - of the infamously unjust arrest and prolonged imprisonment of 9 innocent black men for raping 2 white women - is told as if in vignettes in a minstrel show, a bold and excitingly dangerous theatrical conceit that adds exponential layers of subtext. Unlike the duo's Chicago, also about a miscarriage of American justice and prsented as a vaudeville entertainment, The Scottsboro Boys is palpably discomforting by design - it often aims to make you squirm in your seat as it implicates not only societal racism but the racism of the minstrelry it presents. Except for a rarely intrusive framing story that leads to an unneeded, softening coda (that critics have been kindly asked not to reveal), the musical sustains both a remarkable level of stinging anger and a consistent visceral musical-theatre excitement. There's plenty of praise-worthy craft - director/choreographer Susan Stroman has brought her best game to the staging, the book is purposeful and dynamic, the score is accomplished and often sublime, and the performers (particularly John Cullum, Brandon Victor Dixon, Colman Domingo, and Forrest McClendon) are sensational. But you stagger out of the theatre as you should, somehow altered and thinking not about the parts but about the in-your-face sum. Jolting, serious, thrilling, and absolutely unmissable.
Posted by Patrick Lee at 6:01 PM