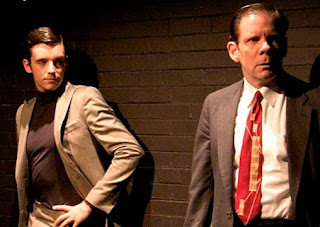 I had hoped to like The Temperamentals, now transferred to one of the New World Stages, a lot more than I did in its earlier, off-off Broadway incarnation, but by the middle of its first act I was once again slumped in my seat with a case of the Gay History Lesson Blues. The playwright, Jon Morans, should get due socio-cultural credit for dramatizing the mostly overlooked gay rights pioneers who formed the Mattachine Society decades before Stonewall, but did he have to go about it with so heavy a hand? Although the show is not the joyless slog that most "good-for-you" theatre is - there's lively entertainment value in watching the unlikely love relationship unfold between social activist Harry Hay and young fashion designer Rudi Gernreich - it's still essentially the kind of theatre that makes you worry you'll be told to stay after to clap erasers. The playwright makes sure we know that the characters are fighting for something, but that's not as involving as giving them something playable to fight against: the play lacks actable conflict until a new character shows up out of nowhere very late in the first act. The lead performances, by Michael Uhrie and Thomas Jay Ryan, are at all times nuanced and credible, the main reasons to see the show, in fact. Arnie Burton is a clear standout among the otherwise far-from-subtle supporting cast.
Posted by Patrick Lee at 7:33 PM