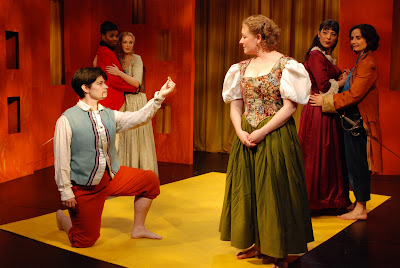 Farce is difficult to pull off. Farce on a low budget, with no actual doors to slam, is even more difficult to pull off. But the talented Queen's Company, an all-female troupe, do more than pull off The Wonder, an early 18th-century farce by Susanna Centlivre. They triumph. The Wonder pivots on young lovers, avaricious fathers, and mistaken identities. As adapted and directed by Rebecca Patterson, it includes pantomime, dancing, and rock music; I particularly enjoyed the use of Cat Stevens' song Father and Son. The entire cast is excellent, and the women playing the men's roles are amusing and convincing. In an interview on nytheatre.com, Patterson said, "if you just cast men in the male roles there is limited opportunity for female actors to act in classical productions—there is no reason why the wealth of talent of our female actors should be denied access to playing the male classical roles." It is sad to contemplate that some of the women in The Wonder will not have the careers they deserve because they don't match some template of gender, looks,weight, and race. May the Queen's Company live long and continue to gift us with their talent.
Posted by Wendy Caster at 1:42 PM