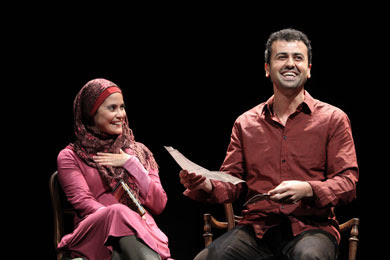 Photo/Joan Marcus
Yes, the cast of Jessica Blank and Erik Jensen's latest documentary play, Aftermath, are actors. But in perfectly speaking the exact words of Iraqi refugees in Jordan (well, 90% of their words), they are something more, too: they are mediums. At their best moments--and there are many--they are mirrors, too. And yes, the show has been edited--piecing together moments from six different interviews--it's not blatantly agenda-driven, or accusation-based. In other words, it's a lot harder to dismiss. The show is so quietly powerful, in fact, that even Blank's expert direction, full of subtleties, is even too much: the actors are convincing enough to make us forget the conventions of theaters. What we won't forget are their words--"There are some things for which apologies are not enough," says an imam unjustly brought to Abu Ghraib--or their surprising characters, like the arrogant dermatologist Yassir (Amir Arison), whose idolization of Richard Gere ("He is...steely") says a lot for what traits he now values. The play is also filled with a variety of wonderfully mundane moments, like a wife "negotiating" the facts her husband is laying out, and sometimes the description of how a man's wife has stopped painting (after the bombings) is just as affecting as a widow's keening over the infant son she just lost in the bombing. The news may have inoculated us against one type of sorrow, but not the other. Do yourself a favor and stop all these "afters"; go now.

What a great resource!