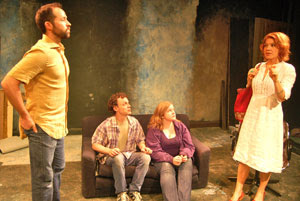 Based on Viral and Universal Robots (see review here), I would have to say that Mac Rogers is one of the best playwrights writing today. Rogers's compassion, insight, unique point of view, and dark sense of humor combine with his prodigious talents to create remarkable evenings in the theatre. Viral, which was part of the Fringe Festival and the Fringe Encores, focuses on a woman who Goggles the phrase "painless suicide." She ends up in what she thinks is a support group with Geena (the wonderful Rebecca Comtois), Jarvis (Matthew Trumbull), and Colin (Kent Meister), three losers who have a rather unusual favor to ask of her. Viral provides genuine suprises and the characters fascinate and remain sympathetic even at their worst. Director Jordana Williams has led the superb cast to perfectly calibrated performances, and the amazing Amy Lynn Stewart is perfect as Meredith.
Posted by Wendy Caster at 4:31 PM