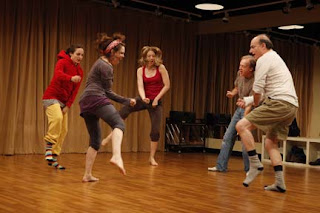 Anyone who's been around theatre games or acting classes will key right in to the humor in this new play (by Annie Baker) at Playwrights Horizons in which an acting coach (played brilliantly and with delicious detail by Deirdre O'Connell) leads four adult students through exercises. The play is heightened just enough to make even the most ordinary theatre games seem strange and funny but not so much that it mocks or belittles the craft - it's grounded in truthfulness and reveals a surprising poignancy beneath the humor. The play may be a tad overlong at this early stage in previews, but all five actors - Reed Birney, Peter Friedman, Heidi Shreck and the scene-stealing Tracee Chimo - are already spot on individually and as a team.
Posted by Patrick Lee at 5:01 PM