The River Crosses Rivers: Series A 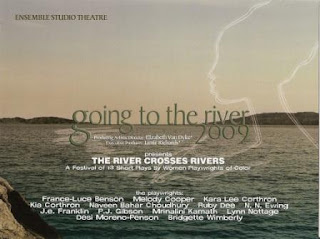 The River Crosses Rivers: Series A is another strong evening of one acts by women of color at the Ensemble Studio Theatre (my review of Series B is below). The standout of the evening--of the whole festival--is Lynn Nottage's heartbreaking Banana Beer Bath, a monologue, brilliantly performed by Elain Graham, about hiding from the Ugandan rebels who are attacking her parents. It was breath-taking in the literal sense of the word.

During both evenings, I was struck by the variety of topics depicted: angels, history, punk rock, the pressure to get married, ungrateful children, parenting, loss, romance, dishonesty and truth, how a second can change an entire life, and more. And the characters were varied too: men and women, young and old, straight and gay, black, white, and subcontinental Asian.

I look forward (with more hope than optimism, to be truthful) to a world where everyone's voices are heard. Many thanks to Going to the River 2009 and the Ensemble Studio Theatre for getting us a little closer to that world.
Posted by Wendy Caster at 10:49 AM