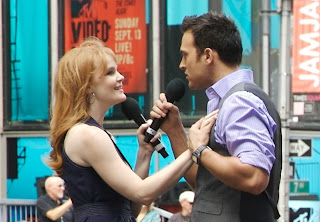 The Broadway season officially began a few months ago but for many strong-legged tri-state area fans the real kick-off is this annual Times Square concert where most if not all of the currently running musicals are represented. As always there were numbers by new cast members in long-running shows - of these, Beth Leavel scored with "The Winner Takes It All" from Mamma Mia! and Laura Osnes did well by "I'm In Love With A Wonderful Guy" from South Pacific - and there were songs from productions that haven't opened yet. This year that meant the originals Fela! and Memphis and the revivals of Bye Bye Birdie, Ragtime and Finian's Rainbow. While "One Boy", the number from Birdie, was charming and well-sung, and the crowd very clearly responded to the title song from Ragtime, it was "Ol' Devil Moon" from Finian's Rainbow that did it for me. I can't think of two musical theatre performers I'd rather see in those lead roles than Cheyenne Jackson and Kate Baldwin, and their old-school musical comedy chemistry helped to make their rendition of that ol' showtune standard the concert's most transporting delight.
Posted by Patrick Lee at 11:37 PM